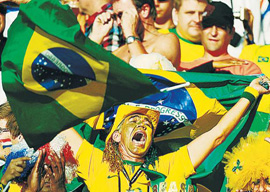 In sporting terms, America is very much an island with its own quaint customs. For this reason the etymologically unsound American version of “football””the world’s most popular sport”mainly consists of throwing a non-spherical object by hand while swathed in body armor. American “soccer” superficially resembles football, with the added dimension of anxious US “soccer moms” who push their youngsters into a sport whose reliance on large open spaces minimizes participation by “ghetto kids.”

Despite the similarities, American soccer and football as it is played in the rest of the world are two entirely different sports. In American soccer, tribalism consists of keeping unwanted tribes out of soccer altogether. But the international version of football is innately tribal, with almost every major city divided into rival fan groups whose main purpose in life seems to be baiting, demeaning, and belittling their rivals.

This was demonstrated in the recent “friendly” match played in London between Scotland and Brazil, where once again tribalism and race leaped to the fore.

“Around the world, throwing a banana onto a football pitch is edible semantic shorthand for insinuating an opponent’s affinity with apes.”

A Scottish dye worker named Tom Donohue first brought the game to Brazil back in 1894. Brazil would rise to preeminence among the developed footballing nations, winning five World Cups. But with a population of nearly 200 million, their success is based on a much larger talent pool than its main rivals: Germany (81 million), Italy (60 million), and Argentina (40 million).

The recent game in London ended in a 2-0 victory for Brazil, with their teenage mulatto striker Neymar netting both goals against the Scots while apparently balancing a ferret on his head. Brazil’s brilliance is not based on their much-touted funky ethnic mishmash but simply on vast numbers of players from which to choose. Here as elsewhere, demographics are destiny.

As is common in football, the actual game”a dull victory with the favorite overcoming a cautious and defensive underdog”was overshadowed by non-footballing events. After the final whistle, Neymar complained that he had been jeered at throughout the game and that someone had thrown a banana onto the pitch.