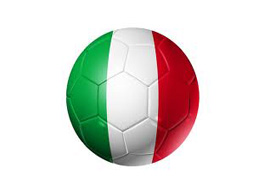 Whom do I support? England, for one simple reason: I am English. But even when Italy is playing some other nation, I want Italy to lose because I love nothing better than winding up Italians!

I have lived and worked in Italy for years and am married to an Italian. But that makes no difference. I do not feel in the slightest bit Italian, let alone European. I could even become an Italian citizen if I wanted to because I have been here so long. Does the idea interest me? You must be joking. Italians may be great fun on the beach or on the dance floor for a few days when you are on holiday, but try living and working cheek-by-jowl with them day after day. If that makes me a racist, then so is every other normal human being in any of the 27 nations that make up what is so dishonestly called the European Union. And let’s not get started on the Germans. Although Greece lost, the entire continent wanted the bossy Krauts to lose to the poor Greeks in another quarterfinal on Friday.

“Here is why there will never be a United States of Europe: People are more loyal to their nation than to their class.”

So when England wins tonight and my team proceeds to the semifinals in this year of my Queen’s Diamond Jubilee to play the Germans”whom they will also defeat”I shall go immediately after the final whistle to celebrate at La Petit Arquebuse, the radical-chic bistro below my office in ForlÃ¬ where all the champagne commies go.

I shall stride into La Petit with my head held high, brandishing a Union Jack, and singing the triumphal chorus of “Rule, Britannia!“ at full throttle.

After being off the booze for nearly a year now, I shall probably reward myself with a very large glass of red wine. Or two. Why not? I deserve it simply for being born an Englishman.

And just to irk all those bourgeois lefties who have swapped the European Union for the Soviet Union as the totem pole around which they dance, I shall belt out a few rousing choruses from other patriotic songs such as “Land of Hope and Glory.”

And when I have done singing and trotted out the joke about Italian tanks having five gears”one for going forward and four for reversing”I shall say to the Italians in La Petit: “Hey guys, why all the long faces? You”re Europeans now, not Italians, no?”

Clearly, if I were to do any of this I would risk “having the shit kicked out of me,” as they say in London’s rougher parts”even if it’s by a bunch of Italian champagne commies who define themselves as pacifists whenever America sends in its military.