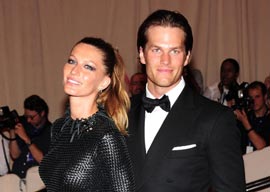 It was, using Edward De Vere’s words, much ado about nothing. The media didn”t think so, called it “Deflategate,” and one of America’s great sporting heroes, Tom Brady, was pilloried as if he had inflated the beautiful model Gisele Bundchen, his wife, against her wishes. If any of you Takimag readers missed it while on holiday in Albania, Brady and the New England Patriots supposedly deflated the footballs used in the championship game against the Colts so Tom could better find his receivers. The NFL, needless to say, was shocked, shocked that anyone playing professional football in America might bend the rules in their favor, and suspended Brady for 4 games, fined the Patriots one million big ones, and took away some draft choices. If Captain Renault was around, he”d be winking at Rick and telling him these NFL people make us look like hicks.

For cheat’s sake, everyone in pro sports and in college sports in America cheats, starting with the fact that college athletes graduate after four years but are illiterate. Back in 1949, during the good old days of baseball, they even made a wonderful baseball movie by the name It Happens Every Spring. It celebrated cheating, the hero being an absentminded professor who accidentally discovers a potion that once applied to a baseball makes it avoid wood. He takes a leave of absence and wins 30 major league games. Mind you, it’s only a movie, but then in October of 1951 “The Shot Heard Round The World” took place. Bobby Thompson’s homer against Ralph Branca won the pennant for the Giants, but then the manager Leo Durocher proudly announced how the Giants had been stealing the signals of their opponents for years by having installed a powerful telescope-like contraption in their locker room at the old Polo Grounds in New York. The locker was situated in center field, rather conveniently. Everyone cheered the cheaters and booed the chumps. They don”t call it the land of opportunity for nothing.

Senator Bill Bradley has admitted that when playing for the Knicks he used to deflate basketballs in order to gain a competitive edge, and the great Gaylord Perry got into the Hall of Fame by throwing spitballs. Perry never revealed how he got the spit on the ball, but did say that he used to line his baseball cap with Vaseline. The Colorado Rockies openly keep their baseballs inside humidors, like cigars, to keep them from drying out and flying off the face of the earth. Colorado is high enough as it is. My favorite cheater was that woman Rosie something, who won the Boston Marathon, was almost sanctified because she was a Cuban, then it transpired that she had taken the subway for most of the way and had only run about a mile or so. Better yet, the Yankees didn”t mind when Andy Pettitte and Roger Clemens used steroids, and the baseball commissioner said nothing when Barry Bonds broke Babe Ruth’s and Hank Aaron’s homer record by quite a lot, almost as much as his head grew from extreme use of steroids.