For White Girls Who Have Considered (Career) Suicide 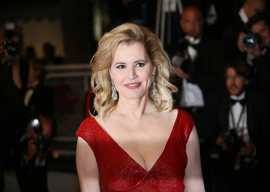 It’s been less than a month since actress Frances McDormand used her Oscar acceptance speech to push for the adoption of “inclusion riders” in entertainment-industry contracts, and, true to form, Hollywood has been quick to mindlessly jump on the bandwagon. In the weeks following McDormand’s speech, Black Panther star Michael B. Jordan announced that from now on his production company will adopt inclusion riders for all of its future projects. Matt Damon and Ben Affleck declared the same. And Hollywood superagent Ari Emanuel, CEO of William Morris Endeavor (WME) and brother of sentient AIDS virus Rahm Emanuel, bragged that from now on, WME will consider inclusion riders an “imperative.”

So what exactly is an “inclusion rider”? It’s a clause inserted into a motion-picture contract. It’s a mandate, a demand, that the movie must include, as McDormand put it, “at least 50% diversity” in its cast (the rider sometimes applies to crew as well, but for the purposes of this piece, I’m focusing solely on cast). Now, don’t be fooled: “50% diversity” means 50% non–white male. That’s what’s so fascinating about the use of the word “diversity” in this context. The inclusion rider is exclusionary in nature. It means “everyone except white males.” By this definition of “diverse,” one could refer to the Third Reich’s Nuremberg Laws as encouraging “diversity,” if you look at the laws strictly from the perspective of the many groups not excluded by them, as opposed to the one group that was.

Stacy Smith, head of USC’s Annenberg Inclusion Initiative and originator of the inclusion-rider concept, explained to The Washington Post that “contemporary dramas” will be forced to cast “50 percent women, 50 percent minority, 20 percent people with disabilities and five percent LGBTQ.” Historical dramas, she assured the Post, “would be exempt” (cue John Gielgud from Arthur’s sarcastic voice: Oh, thank you, madam). These quotas are needed, according to Smith, because movies “have to be filled with norms that reflect the world in which we live.”

“Some in the industry have cautioned that the inclusion-rider concept is impractical. I prefer to call it borderline retarded.”

Some in the industry have cautioned that Smith’s inclusion-rider concept is impractical. I prefer to call it borderline retarded. She wants movies to “reflect the world,” but how many movies claim to be set in “the world”? Most films have a more specific location—a city, a town, a place of employment, a house. Any industry professional will tell you that casting isn’t supposed to reflect “the world” but rather the specific location of the specific film in question. But that’s just common sense, so it has no place in Stacy Smith’s fevered mind. One might also ask what Smith’s inclusion rider would have done to a movie like Black Panther. Should the citizenry of Wakanda have included 20% Chinese, to reflect their percentage of the world’s population? Of course, I’m being facetious. As I already indicated, Black Panther is considered “diverse” because it features very few white males.

It should be noted that the two most vocal apostles for the inclusion rider are the aforementioned McDormand and another Academy Award-winning actress, Geena Davis, who has, in the past, partnered with Smith on “inclusion” projects. McDormand and Davis are white, and their fanaticism regarding inclusion riders exposes a blind spot—indeed, a delusion—that affects many white actresses in this business: They see themselves as being among the “oppressed.” Traditionally, in Hollywood, white actresses have had it pretty good. They’ve always been in demand…especially the attractive ones. This town has been exceptionally kind to them, in no small part because they are the beauty ideal of many of the men who run things behind the scenes. Sure, there’s always been a downside, from Harvey Weinstein whipping out his dirlywanger to Howard Hughes’ bizarre obsession with the pertness of his leading ladies’ breasts. But regardless of (and sometimes because of) the odd perv, pretty young white actresses in this town know that they’re desired, and they don’t need any consent decree or quota system in order to maintain that privileged position.

Having been surrounded by actresses my entire life, I can tell you that if one word describes them, it’s needy. Very, very needy. White starlets are more likely to get the attention that all actors crave, and it’s sincere attention. It’s not like when a production company is forced by prevailing social justice winds to hire dark-skinned black actresses (the sort my high school chums used to describe as “blue-black bitches”), and you have a roomful of male execs condescendingly going on about what a “stunning beauty” she is. I’m not saying black can’t be beautiful, but around these parts, it’s not the ideal, and I’ve always felt certain that a lot of black actresses sense the patronizingly insincere compliments that get thrown their way.

When white actresses like McDormand and Davis (and Jennifer Lawrence, etc.) talk about “inclusion” and “diversity,” they see white women as part of the “coalition of the underrepresented” who would benefit from something like an inclusion rider. They are dead wrong. Actors (and especially actresses) of color don’t see white women as needing or deserving any special protection or quotas. They see them as part of the privileged class, not rejects from it. Black actresses in particular despise their white counterparts. When a black actress hears “inclusion rider,” I can tell you with absolute metaphysical certitude that she is not thinking, “Oh, yes, we need that rider in order to help the poor, downtrodden blond girls in my acting class!”

The tone-deaf lack of awareness exhibited by the white actresses who are pushing the inclusion-rider nonsense reminds me of every snapshot I’ve ever seen of spoiled young white chicks whose daddies (or sugar daddies) treated them to an “adventure” vacation in the Third World. White chicks love taking pictures of themselves surrounded by black and brown locals, hugging them, squeezing ’em tight, wearing an expression that says, “These are my new best friends!” White actresses who see themselves as part of the Hollywood “dispossessed” might as well be some vacationing Beverly Hills Becky telling a Ghanaian trash-digger, “We need to stick together because we’re both so badly oppressed!”

The simple fact of the matter is, rather than benefit from inclusion riders, white actresses—not the successful ones presently campaigning for their use, but the up-and-comers who don’t have an Oscar and don’t share a bed with a Coen brother—will suffer, because to properly prove its dedication to “inclusion,” Hollywood will have to decrease the number of white actresses in visible roles. White male actors will not suffer as badly. Why? Because minority activist groups don’t like seeing black and brown actors cast in “negative” roles. Movies and TV shows need villains—rapists, thugs, terrorists, wife-beaters, serial killers, etc.—and minority groups are only too happy to leave those roles to white guys (indeed, casting an “actor of color” in a villainous role has often led to protests and boycotts by groups like the NAACP). When The Sum of All Fears replaced the book’s Arab villains with neo-Nazis (thanks to a lobbying campaign by CAIR), white actors got work. When Children of Men deviated from the novel by inventing a subplot involving thuggish skinheads, more work for white guys. Every time the TV show Law & Order changes a black villain to white in its “ripped from the headlines” episodes, white actors profit handsomely (in the second half of season 13 alone, Law & Order switched races from black to white in dramatizations of the Beltway snipers, the Michael Jackson molestation trial, and the Bison Dele murder case). Sure, from a political point of view, such race-swapping is vile. But from the POV of white actors, it’s a boon. As long as pressure groups continue to demand that nonwhites not be portrayed “negatively,” white actors will be fine.