Fortysomethings (and Why I Hate Them) 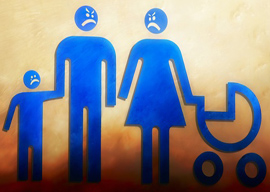 Divorced, decapitated, dead”King Henry VIII’s wives had it simple. For 21st-century fortysomethings”my contemporaries”the litany of woe is somewhat more extensive: dull, dumped, dejected, disillusioned, deranged, drunk, druggy, dried-out, dried-up, and often dangerously desperate. Only on occasion are they ever beheaded. Forget the terrible twos; the failed forties are the real shocker. It is a noxious age.

There is something rotten in the soul of modern fortysomethings. Every survey suggests they are the most miserable pick of the crop. Their malaise runs deeper than the average midlife crisis, with its desire to paraglide, own a motorbike, date the young, and inject the Botox. No, it is much bleaker. Mortality looms, life’s end can be glimpsed ahead, and the fortysomethings cannot handle it. Above everything sits the blackest cloud of all”a heavy sense of disappointment.

Look around and ask yourself if you are edified by what you see, uplifted and delighted by the fortysomething company you keep. I doubt it. The men are invariably jaded, careworn, humorless, overworked, and dull; the women are wide-hipped, flat-shoed, pre-menopausal, neurotic, self-absorbed, and mad. Oh, and the visits to the therapist exacerbate the drivel and tedious introspection. God, where has a lightness of touch and all the laughter gone? Gone to graveyards, every one.

Contentment is a distant dream for the fortysomething. There’s a dawning realization that surprises are few and surprising people are fewer, that life is what it is and this is truly it. Oh, shit. The parents are dying off and the children growing up. Time accelerates and age creeps on. The push of youthfulness recedes and the pull of fiftydom beckons. And the buck stops here. Small wonder about the despondency and dismay. Singles want to be married and the married wish to be single. Relationships buckle to the pressures of boredom and indifference and the graying of the spirit.

“Forget the terrible twos; the failed forties are the real shocker. It is a noxious age.”

Read the subtext to those Christmas round robins. Decipher the faux, Prozac-and-booze-fueled cheeriness and smug certitude. “We have had a blissful and successful year, entertaining and traveling and having so much fun! Although David lost his leg in a gardening accident and gave me chlamydia from a now-ended affair, everyone is thriving. Freddy did wonderfully in his exams but was sadly eaten by a Nile crocodile during his gap year. Sebastian discovered skunk and developed schizophrenia in his first term up at Oxford. Sophie, bless her, is loving boarding school, is Grade 5 clarinet, and has become a mother at thirteen! How lucky we all are….” The families are dysfunctional and disintegrating, and you would never know.

The fortysomethings are the unhappiest of has-beens. Some make it and others do not; some simply lack the balls and spine to fight their way to the other side. Face it: The kids have the energy, optimism, and potential. That is before they grow up to be smackheads, serial murderers, or estate agents and generally to disappoint. But their disasters are for later. Meantime, their fortysomething parents trudge onward, resenting and envying them in equal measure, wanting to ape and live through them, to be their friends and seduce their teen acquaintances, to rediscover their golden age. The offspring inhabit a space close enough to remember yet too distant to wholly comprehend. It rankles. It hurts. It leaves another nail beside the open coffin.