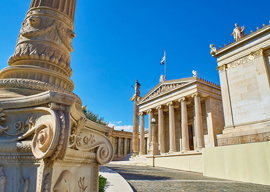 The Academy of Athens

The New York Times has announced a forum to discuss democracy in the cradle of democracy, Athens, sometime in September of this year. It is as if the late John Gotti held a forum to discuss crime in Chicago, God rest his soul. Gotti committed crimes in order to live like a Sulzberger. Sulzberger commits crimes daily by slanting news and waging unremitting war on whites, Christians, and those of us who are attracted to the opposite sex.

In an advertisement for the upcoming forum in my hometown—as if we didn’t have enough problems already, as they say in Tel Aviv-on-the-Hudson—I noticed that “emerging democracies are backsliding into authoritarianism…” and other such slanders the Times publishes daily. This is a libel against Poland and Hungary, two nations that are resisting central control by Brussels and also telling illegal Africans to leg it back to their own continent.

“But do visit Athens soon after the bandy-legged louts leave.”

But the reason I write this has nothing to do with the two best countries in Europe, which are both Christian as well as independent enough to tell the unelected capos in Brussels to shove it. I write because of the small print accompanying the advert: “The Times will bring together its senior journalists with business leaders, policy makers, and a broad variety of experts to debate and discuss the current state of democracy….”

Senior journalists at the Times are known to be Goebbels-like disciples of the paper’s line, which is pro-criminal, anti-cop, pro-homosexual, anti-normal, pro-freak, anti-family, you get my point. The broad variety of experts, I assume, are a bunch of leeches who sell snake oil to people dumb enough to attend such conferences, self-described experts at that, basically crawling parasites who agree with the highest bidder.

A couple of years ago, one Roger Cohen, a bald South African who now calls himself an American via London, used such lachrymose prose to describe the death of his father—I believe he was a dentist of sorts—that it reminded me of a queasy teenager squeezing his pimples. The halitosis of the Times and Cohen’s intellect is overpowering at times—no pun intended—so my paternal advice to Takimag readers is to try to avoid Athens for those four days in late September and if need be go to Palm Beach instead. Over there the air is much fresher due to the fact that people who live there never open their windows. But do visit Athens soon after the bandy-legged louts leave. It is a fine if tired city with very nice people. Too bad about the forum, however.