Four Fashion Trends That Must Be Nuked in 2009

I’m still a youngster”right on the borderline between Baby Boomer and Generation Xer. I’m considered to be cool, I still say “hip,” but I’m old-fashioned. I dress less-than-conventional, and in fact I am labeled by my friends as retro. I like short skirts, open necklines, and form-fitting, flared jeans, but I don’t like the skanky or sleazy look. And I dislike anything frumpy or old ladyish.

But I reckon I am considered to be fashion intolerant when it comes to the mass acceptance of nauseating apparel conventions concocted by slick individuals who devise ludicrous ways for satisfying peoples’ desire to look absurd. Thus my overall lack of admiration for the fashion intelligence of the masses has lead to this misanthropic musing on four current fashion fetishes that are a source of irritation for me whenever I am in public.

The first item up for assault is crocs. These are hideous, plastic shoes that come in colors which rival children’s toys. They are appalling yet everyone wears them. A friend of mine called them “the lazy person’s shoes.” Indeed, you don’t have to think about what to wear and you don’t have to bend down to buckle or tie anything. Just slip on a pair of the neon-colored, plastic junk things and they go with everything. What’s worse is that men wear these things and it makes them look like girly-boy weenies. While I am out and about”restaurants, stores, wherever”I see whole families wearing them. In west coast coffee shops they are the standard shoe code. A few weeks ago I was in a west coast, upper-middle class java retreat when a family of four walked in and each one of them was wearing different color crocs. Dad was sporting neon green. True individualism! Why ban smoking when you can have just as much authoritarian pleasure banning those unsightly things? Believe it or not, crocs even come in camouflage for men, and that ain’t a pretty sight.

The second thing I loathe is the wearing of flannel pajama pants in place of real pants. Laziness compelled young kids to start wearing their flannel pajama pants in public and so clothing manufacturers caught on”a new fashion! They marketed to the stupidity of the follow-me masses and made pajama pants for all-day use. One may ask: why do people wear pajama pants out of the house? Because modern humans are, by nature, accommodating followers who lack the wherewithal to be skeptical or employ critical thinking skills. They do what other people do without question. If other people wear pajama pants to Applebee’s or the movie theatre, they will follow the fad. In fact, Michael Jackson wears pajama pants in public. But Michael Jackson also cuts up his facial parts and bleaches his skin, so, whatever.

The pajama pants travesty is primarily a female trend. And I say female because it’s not just young girls”older gals wear them, too.

Women who are pushing well into the forty-something age bracket are wearing these when they are out with their daughters who are also wearing them. Isn’t it nice that Mom is willing to pal around with her teenagers and join the fool’s parade? I’ve got a newsflash for Moms with protruding bellies and expanding hips in flannel pajama pants in public: someone should put you all in a corner in a state of “time out” and flog you until you come to your senses. Since when do friends let friends leave the house in pajama pants?

Now for the worst thing: ask me how often I see people out in public wearing pajama pants and crocs? Well, don’t ask me because it’s too annoying to think about.

Another really imbecilic style that is considered “fashion” is the skinny jeans look. Every one of these things ever made should be hung on a clothesline and shot with multiple pulls on the trigger of my Remington 20-gauge. This would probably catch on as a fad (hole-filled skinny jeans), and people would start shooting at their jeans and I could become a wealthy entrepreneur by patenting and producing such nonsense.

These jeans, just because they are called “skinny jeans,” are not meant to make you look thin. The “skinny” refers to the fact that they have a skinny cut and are meant to emphasize a “skinny leg” look. 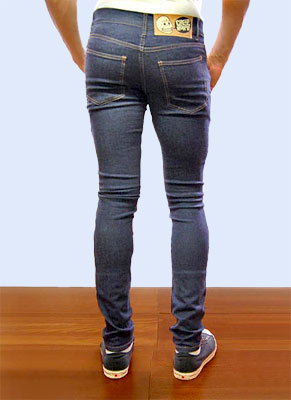 Problem is, skinny people don’t look good in their namesake jeans. Girls always look distorted and chubby, even if they are truly thin. Skinny boys wear them and it makes them look feminine or androgynous. Some are after that look, so it’s suitable. If kids in skinny jeans aren’t bad enough, we now see older people”women and men”wearing these things because the kids wear them. The kids look bad in them, but the parents look ridiculous and embarrassing. Why do parents think that they can wear the same clothes as their fashion-frenzy, follow-thy-leader teenage children and look good? Just this week I saw two women my age walking in the mall, shopping together, wearing skinny jeans and 4-inch heels. They both looked like lopsided potato sacks on stilts.

Skinny jeans attempt to accentuate the thinness of the legs”even if the wearer’s legs are not genuinely thin. Thus it follows that the width of the waistline will be over-emphasized. A thin woman’s waistline looks the width of a middle linebacker’s shoulders in skinny jeans. I once grabbed a pair of skinny jeans and tried them on for purposes of testing my own intolerance. They were enormously uncomfortable and they made my waistline (size 2-3) look like a plastic bag overstuffed with Styrofoam packing peanuts.

Another fad on the receiving end of my contempt is anything from Hollister. Young kids are addicted to this overpriced, low-quality clothes retailer. For purposes of private empirical studies I have walked around a Hollister store twice”just recently I was in the store at the Mall of America near Minneapolis. I have to hand it to the company marketing execs”they know how to capture a market with nothing but brand-powered momentum. The kids go to Hollister stores to buy something, anything with a Hollister logo because they have been taught that they are judged (and they will judge others) based on a logo on a t-shirt or the bag that carries it out of the store. A Hollister clothing item means that you are someone of value. The same t-shirt, were it to come from Kohl’s, could not possibly add to the self-esteem of the professional consumer child.

Hollister is a religion among the suburban middle class wanting to be popular. Shopping at that money trap is a way of life for kids whose self-esteem is based on what they know about what other people think about the way they look. Hollister stores have a freakish atmosphere that siphons the kids in: the entrances look enticing from the outside, there are no windows, and they play obscenely loud music inside. Once inside, the stores are dimly lit (so you can’t see how crappy the clothes are) and mysterious, yet they are intentionally arranged so that it is difficult to squeeze through the aisles without bumping into everyone else. Hollister clothes for males are in the contemporary style: androgynous and cut for the starved-skinny look.

On a few occasions I have seen one of the fashion crimes of the decade: adults wearing Hollister clothes when they are with their children. That is a part of the “let’s be pals” mentality that parents want to convey to their children. They listen to the same music and wear the same genre of inane clothing, and thus give the impression of being juveniles on steroids. I predict that Hollister is a credit bubble business that will one day go away. Hopefully.

Clearly, I had to bring this article to an end at fashion atrocity number four”otherwise, disparaging remarks may have gotten out of hand. I could go on and on about how easy it is to sell copycat, self-esteem-in-a-box to a bunch of credit card-enabled twits who, in their desperation to be individualists who look just like everyone else, will snap up just about any obnoxious trend that comes along.

Just don’t condemn me for being cantankerous and intolerant. You, too, can be the same if you try hard enough.