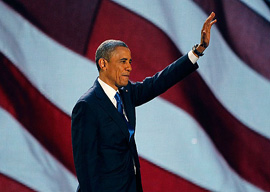 What is going on is the present-day proof of the truism observed by Thomas Jefferson and Alexander Hamilton, who rarely agreed on anything in public: When the voters recognize that the public treasury has become a public trough, they will send to Washington not persons who will promote self-reliance and foster an atmosphere of prosperity, but rather those who will give away the most cash and thereby create dependency. This is an attitude that, though present in some localities in the colonial era, was created at the federal level by Woodrow Wilson and Theodore Roosevelt, magnified by FDR, enhanced by LBJ, and eventually joined in by all modern-day Democrats and most contemporary Republicans.

“As a practical matter, we are in for very difficult times during Obama’s second term.”

Mitt Romney is one of those Republicans. He is no opponent of federal entitlements, and he basically promised to keep them where they are. Where they are is a cost to taxpayers of about $1.7 trillion a year. Under President Obama, however, the costs have actually increased, and so have the numbers of those who now receive them. Half of the country knows this, and so it has gleefully sent Obama back to office so he can send them more federal cash taken from the other half.

It is fair to say that Obama is the least skilled and least effective American president since Jimmy Carter, but he is far more menacing. His every instinct is toward the central planning of the economy and the federal regulation of private behavior. He has no interest in protecting American government employees in harm’s way in Libya, and he never admits he has been wrong about anything. Though he took an oath to uphold the Constitution, he treats it as a mere guideline, whose grand principles intended to guarantee personal liberty and a diffusion of power can be twisted and compromised to suit his purposes. He rejects the most fundamental of American values—that our rights come from our Creator, and not from the government. His rejection of that leads him to an expansive view of the federal government, which permits it, and thus him, to right any wrong, to regulate any behavior and to tax any event, whether authorized by the Constitution or not, and to subordinate the individual to the state at every turn.