Four Ways to Save Europe 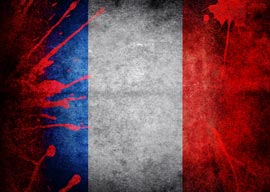 Last week, America’s institutions of higher learning were in turmoil over Halloween costumes. How can minority students survive Yale if their diktats are ever subjected to skepticism from grown-ups?

This week, we are told to not get too excited over 129 people being slaughtered in the streets, concert halls, and cafÃ©s of Paris. In particular, we shouldn”t let minor inevitabilities such as mass carnage influence the West’s refugee and immigration policies.

In other words, while Yale students need their university converted into a Safe Space where they will never be allowed to lose an argument with a professor, making Paris safe for young lovers from Kalashnikov fire would be Islamophobic.

For example, the fact that one suicide bomber’s fingerprints showed he had come ashore as a refugee in Greece last month, where he was handed asylum papers allowing him to travel across Europe, shouldn”t reflect badly on Chancellor Merkel’s decision on a whim to suspend E.U. regulations in order to permanently alter Europe’s demographic balance. After all, as the New York Times Editorial Board triumphantly rebutted:

And even if one of the attackers had entered Europe in the guise of a refugee, the first gunman to be conclusively identified, Omar Ismail Mostefai, was not a refugee, but a French citizen born and raised in a town just south of Paris.

“At least since the days of Joan of Arc the French have fought to keep it their country so that they can live as they choose, just as Muslims have dozens of countries run by and for Muslims.”

Of course, that several of the dead Islamic terrorists were born in Europe may seem like an argument against letting in world-historical numbers of refugees, because this shows, once again, that assimilation takes generations. The sons and perhaps grandsons of Merkel’s Millions may be killing European civilians for sport in the mid- or even late 21st century.

You may admire Paris as the world capital of heterosexual romance over the past 800 years. But Salafist Muslims consider girls flirting with boys while they make up their minds about which one to marry to be disgusting. And why should the French be allowed to behave like Frenchmen and Frenchwomen just because they live in France when they know Muslims object? By going out on dates, the French are punching down at “a powerless, disenfranchised minority,” as Doonesbury cartoonist Gary Trudeau characterized the Muslims who shot up the Charlie Hebdo office last January.

You might say that, well, the French have their own country. At least since the days of Joan of Arc they”ve fought to keep it their country so that they can live as they choose, just as Muslims have dozens of countries run by and for Muslims.

But nationalism is out of fashion, at least for white Christians. As Bill Clinton informed Australian business leaders on Sept. 10, 2001, he believed in “the ultimate wisdom of a borderless world.” In all the excitement of the following day, Hillary’s husband dropped that line of patter. But is there much doubt that it reflects the underlying assumptions of our globalist ruling class?

White people having their own countries is racist. For example, in 1959 Charles de Gaulle was advised that the way to hang on to the restive French colony of Algeria was to fully integrate it into the French state. De Gaulle answered:

It is very good that there are yellow French, black French, brown French. They show that France is open to all races and has a universal vocation. But [it is good] on condition that they remain a small minority. Otherwise, France would no longer be France….

Arabs are Arabs, the French are French. Do you think the French body politic can absorb ten million Muslims, who tomorrow will be twenty million, after tomorrow forty? If we integrated, if all the Arabs and Berbers of Algeria were considered French, would you prevent them to settle in France, where the standard of living is so much higher? My village would no longer be called Colombey-The-Two-Churches but Colombey-The-Two-Mosques.

Today, obviously, we know far better than de Gaulle did. President Obama, for example, was shocked by Jeb Bush’s suggestion that America “should focus our efforts as it relates to refugees on the Christians that are being slaughtered.” The ex-Muslim president immediately shamed the Republican candidate for his concern for the victims of the anti-Christian slaughter being perpetrated by Muslims:

“When I heard political leaders suggest that there would be a religious test for which a person who’s fleeing a warn-torn [sic] country is admitted…that’s shameful,” Obama said, growing visibly heated. “That’s not American. That’s not who we are. We don”t have religious tests to our compassion.”

But seriously, what can be done to save Europe? Here are four ideas, besides the obvious ones, such as no more mass inundations of Islamic refugees.

My first proposal is to ban cousin marriage. Many Muslim patriarchs force their female children to marry a cousin from the Old Country in order to provide another visa for the clan. It’s male chauvinism, immigration fraud, and icky incest rolled into one. European countries should make couples get a DNA test proving they are no closer related than third cousins.

Second, every country needs a National Immigration Safety Board, modeled upon the U.S. National Transportation Safety Board, to issue authoritative reports upon the causes of catastrophes stemming from immigration snafus. The NTSB was made independent of the Department of Transportation in 1974 because Congress found that other government agencies were too politically compromised by their mission to promote transportation to be trusted to tell the truth about the causes of airline crashes.