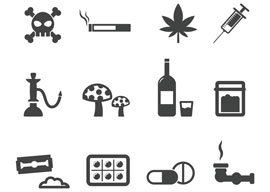 Now that Colorado has legalized marijuana (though not for 4th graders), drugs are back in the news, and that inevitably brings the discussion to the decriminalization of all drugs.

The two bad trips that inevitably come up in these debates are: 1. Few understand that just because something’s bad for you doesn”t mean it should be illegal, and 2. Nobody appears to have tried the drugs they”re arguing about. The first one is a simple concept. The second one takes some ‘splaining.

First, pot sucks. Northwestern University recently linked it to brain abnormalities, and we all have those pothead friends from college who never did anything with their lives. There are also some great things about it, especially when used in small doses. It makes sex better, movies more interesting, and laughing with your friends unavoidable. It’s all about moderation. This is true of all drugs. They should be discouraged, not criminalized. Only a couple of the Ten Commandments are laws. None of the seven deadly sins are. Almost half of Americans see homosexuality as a sin, but only a handful of lunatics want gays sent to prison. We don”t want the government regulating our morality. They don”t know how.

Second, why is everyone so sure about how horrible something is when they don”t even know what it looks like? Whenever I have this debate with someone and mention that I”ve tried crack they shriek, “YOU”VE DONE CRACK!?” I”ve done pretty much every drug there is and it’s been a wild ride. The only thing I”ve become addicted to is booze and if you try to make that illegal, I”ll bring back the tommy gun. Here are 15 drugs you should try before debating legalization.

“If I hadn”t had cocaine and Adderall in my history, my bank account would be approximately one-third of its present size.”

What you used to need a garbage bag of back in the 70s can now fit on the head of a booger. Black kids smoke “blunts,” which is a hollowed out cigar with a gram of pot in it, but that’s enough to last you about a dozen Fridays. It is pretty bad for you and can lead to brain damage, especially over generations of use, but so does jail.

The legalization debate was easy back when it was nothing more than a beer in cigarette form. Now that it’s basically LSD, it’s hard to want to legalize it without throwing all hallucinogens in the mix.

This is Canadian pot, which means it’s smaller and more polite but packs quite a wallop if you mess with it.

I heard comedian Joe Rogan recently say he doesn”t trust an atheist that hasn”t done acid. I”ve been screaming the same thing for years. I don”t think you can be a successful scientist without trying it at least once. It permanently stretches your mind. Steve Jobs said it was crucial to his success and so did Francis Crick, the father of genetics. This usually comes in the form of a tiny piece of paper. If you”re over thirty, try cutting the paper into quarters and see where that takes you.

I hear this is a very intense version of LSD but I”m way too old to look into it. Hallucinogens are a young man’s game.

These look like rotten vegetables that have been left in the microwave overnight, and they taste worse. Once you get past that, prepare to enjoy the insight of LSD combined with the giggly body buzz of 1980s marijuana. If LSD was Batman, mushrooms would be Robin, and if you take it on Halloween, all costumes become real.

Crazy drug from the 70s that nobody does anymore.

Like Krokodil, this epidemic is a myth created by the media. More people have probably been raped by a hippopotamus.

These are the zombies you see holding balloons at the edge of the party. We used to inhale PAM cooking spray out of plastic bags, which is probably the same basic inhalant. It is totally legal and makes you feel lightheaded because it plays with how much oxygen your brain gets. It’s probably really, really bad for you but it made us laugh to see our friends pass out, and we gave it up when our fake ID was good enough to buy alcohol.