Foxconned: Who Makes our Computers? 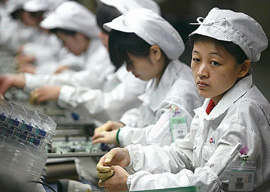 Ghosts were the first thing I remember frightening me as a child. Arthur C. Clarke once said, “Ghosts are at least as real as dreams.” This is the most intelligent statement ever given on the subject, and though I still believe in ghosts to some extent, they no longer frighten me.

Years later, nuclear Armageddon struck terror in me. During that time the Soviet Union still existed, and this was threatening in a way that no one who did not experience it can quite understand. When a foreign leader with the power to create wastelands comes to your country and pounds his desk (possibly with his shoe) and threatens diplomats by saying, “We will bury you!,” it has an impact.

Humanity repeatedly proves itself to be anything but sane. There is also the possibility of accident, which on at least one occasion came down to a single man icily staring over a flickering monitor as he decided whether to begin World War III.

“I”m still using a five-year-old computer made by American workers who presumably did not kill themselves in its creation.”

I don”t think much about nuclear annihilation anymore. It is a concern but no longer a preoccupation. These weapons still exist, though the invective has dissipated.

The thing I fear most these days is slavery”the antiquated bondage-for-life version if not quite the Underground Railroad variety. As with ghosts, I am not in any imminent peril yet the fear looms all the same.

This foreboding was brought home to me yet again recently as I went into the market for a new computer. Aside from shock that on the website of one very well-known retailer there were literally 225 models of laptops from which to choose was the fact of where almost all are manufactured.

Like most people I was aware of slave labor in Third World countries. I had already heard about companies in China where people literally threw themselves off buildings due to maltreatment and despair. I had been following the controversy over Apple computers and its Foxconn contractor where 14 of the suicides occurred.

After I spent more than an hour in the store deciding what to purchase, the salesman blithely noted my choice had been made at…Foxconn…the one in China. Marvelous. Not being a jackass in my entirety, how could I overlook this glaring moral dilemma?

If slavery was my personal pique then I shouldn”t be financing it even from half a world away. True, a few instances of workers murdering themselves don”t represent a company’s totality, but I don”t recall any self-immolations among Starbucks baristas.