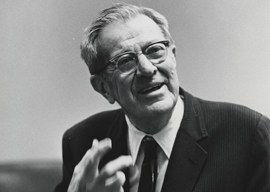 Congressman Steve King (R-IA) has noticed just how extremist today’s respectable conventional wisdom has become. So King has been exercising a Trump-like knack for trolling the Establishment with blunt truths that enrage goodthinkers into revealing just how much their worldview is founded upon hatred of average Americans.

Over the weekend, King tweeted:

[Geert] Wilders understands that culture and demographics are our destiny. We can”t restore our civilization with somebody else’s babies.

Those last three words set off a paroxysm of tut-tutting, with The New York Times declaring King to stand revealed as a “white nationalist.” Chris Hayes of MSNBC lamented:

“Somebody else’s babies” is such a vile phrase, I can”t get it out of head.

Fascist genetics now have a place on Capitol Hill…. Wilders-loving King might also go to Ellis Island for a refresher on the American idea.

The fact that it is so clearly, axiomatically true is why it’s controversial!… They”ve never had to express their first principles on the national question, which most Americans reject out of hand. Now people like Trump and King are forcing them to articulate what, in principle, they actually believe. So they have to say “America doesn”t belong to American citizens,” and they”re upset because they know American citizens disagree.

King is particularly hateful because he represents Sioux County, Iowa, which Stanford economist Raj Chetty’s big 2015 study of IRS returns from 1996 to 2012 found to be the single best county in America for raising children who are upwardly mobile. Sioux County is extremely white, Protestant, native-born, traditionalist, and prosperous. It represents the egalitarian essence of everything that coastal elites find deplorable about the people they currently preside over.

“The problem remains that most of the modern world was built by deplorables, whom the diverse are indoctrinated to resent.”

Numerous talking heads responded to King that taking care of “somebody else’s babies” is what America has always been about. John Adams and the other Founding Fathers weren”t fathers looking out for the interests of their progeny. Instead they were inseminating an idea: that America exists for the benefit of the huddled masses of not-yet-arrived immigrants who are, by definition, the only true Americans.

For example, when John wrote to Abigail Adams in 1780:

I must study politics and war that my sons may have liberty to study painting and poetry, mathematics and philosophy. My sons ought…to give their children a right to study painting, poetry, music, architecture, statuary, tapestry and porcelain.

John and Abigail weren”t talking about, say, their actual sons, such as 12-year-old John Quincy Adams. They were instead enthusing about their metaphorical sons, the wretched refuse who would someday arrive and take over America.

After all, Alexander Hamilton was an immigrant and nonwhite and secretly Jewish, right? (I mean, Hamilton was smart, abrasive, and good with money, so he couldn”t have been a Scotsman. Who ever heard of anybody intelligent named “Hamilton“?) Your $500 Broadway musical ticket wouldn”t tell you politically correct untruths, now, would it?

Seriously, American history has been so severely retconned over the past half century that it’s apparent that most of the people gasping at King’s heresy are only vaguely aware of how humorously deluded they have become.

Countless pundits sputtered in response to King that America has always been “a nation of immigrants,” without realizing that this phrase barely existed in American discourse until it was promoted by the Anti-Defamation League’s propaganda arm in the 1960s.

In reality, Hamilton was highly suspicious of immigrants, writing:

The United States have already felt the evils of incorporating a large number of foreigners into their national mass; by promoting in different classes different predilections in favor of particular foreign nations, and antipathies against others, it has served very much to divide the community and to distract our councils. It has been often likely to compromise the interests of our own country in favor of another.

Hamilton’s colleague John Jay noted in the second Federalist Paper that America was lucky not to be burdened with diversity:

…Providence has been pleased to give this one connected country to one united people”a people descended from the same ancestors, speaking the same language, professing the same religion, attached to the same principles of government, very similar in their manners and customs, and who, by their joint counsels, arms, and efforts, fighting side by side throughout a long and bloody war, have nobly established general liberty and independence. This country and this people seem to have been made for each other, and it appears as if it was the design of Providence, that an inheritance so proper and convenient for a band of brethren, united to each other by the strongest ties, should never be split into a number of unsocial, jealous, and alien sovereignties.

Similarly, the single most important expression of the Founding Fathers, Gouverneur Morris” Preamble to the Constitution, America’s mission statement, refers directly to “ourselves and our posterity”:

We the people of the United States, in order to form a more perfect union, establish justice, insure domestic tranquility, provide for the common defense, promote the general welfare, and secure the blessings of liberty to ourselves and our posterity, do ordain and establish this Constitution for the United States of America.

Likewise, Benjamin Franklin’s most important work of social science, his 1754 essay “Observations Concerning the Increase of Mankind,” was an anti-immigration pamphlet. Franklin objected to his political opponents in Pennsylvania, the descendants of William Penn, importing Germans to rig elections.

He pointed out that since the territory wasn”t getting any larger, immigration drove down the standard of living of natives, who were rapidly filling the colonies without need for somebody else’s babies. Four score years later, Franklin’s measurement of how fast Americans were increasing without immigration inspired Darwin’s concept of the struggle for existence.

But that same year, 1754, the young George Washington got into a firefight with the French near the future site of Pittsburgh, setting off World War Zero, the Seven Years” War. Immigration restriction became an issue postponed for the future as the colonies instead went on to conquer the continent, reaching San Francisco 94 years later.

But the continent is now conquered, and thus the economic logic Franklin pointed out 263 years ago is once again relevant: the fewer the immigrants, the higher and more equal the standard of living. If it’s no longer appropriate to invade the world, perhaps it’s no longer intelligent to invite the world?

Moreover, the divisive cultural clashes that Hamilton and Jefferson saw growing out of immigration are clearly plaguing us today as the diverse try to rewrite American history to degrade the Founding Fathers” contributions.

The reality is that human beings are naturally concerned with their ancestors and descendants. The “nation of immigrants” hype was the work of descendants of Ellis Island immigrants understandably fictionalizing the past to make their forefathers seem more crucial in the national story than they actually were.

As diversity increases, our culture seems to be getting ever more obsessed with ancestry. Everybody except whites is encouraged to be extremely touchy about relatives. Hispanics, for example, are told by Democrats to identify as a race, even though they don”t. They are instructed that any Hispanic illegal alien deported is their hermano to be avenged.

Yet the problem remains that most of the modern world was built by deplorables, whom the diverse are indoctrinated to resent. In my review of Charles Murray’s 2003 tome Human Accomplishment, I noted that over the past 2,800 years:

In the sciences, 97 percent of the significant figures and events turned out to be Western. Is this merely Eurocentric bias? Of the 36 science reference books he drew upon, 28 were published after 1980, by which time historians were desperately searching for non-Westerners to praise.