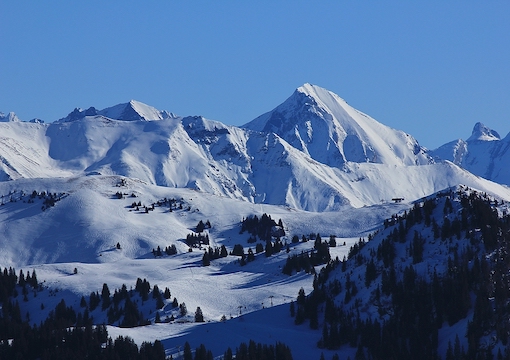 GSTAAD—According to a little bird Boris has gone from brilliant to bawd, and according to me this village has gone from unlivable to perfect in one easy week. The slopes are empty, the snow is excellent, the restaurants now take reservations, and the slobs are visible but not dominant in town. If April is the cruelest month according to T.S. Eliot, January is the nicest month according to yours truly. The liver has a break, the insect-eating grinning imbeciles have gone back down to the cities, and my brain cells are beginning to function again. It’s only a short break, three weeks, and then the mobs return, like scum coming to the surface, until late in March, that is.

Back in the good old days, here in neutral Switzerland but snobby Gstaad and St. Moritz, those not belonging to the Gotha dismissed or hid all of what they’d been before. Those were pompous times, I admit, but everyone was kept in line by the loftiness of the leaders. Then we all suddenly became equal, with money replacing social status, and soon after that life became a free-for-all. Very rich Gulf camel drivers and even richer Russian gangsters replaced the old order like the Bolshies did back in 1917. The Eagle club erected walls to defend the old-timers from the savages, but there were too many of us already inside for comfort.

“Elizabeth Holmes is too pretty for jail and she’s also just had a baby.”

In January, however, it’s like old times, although while skiing yesterday I noticed some pretty awful types emerging from a club started by a ghastly sociopath who used to work for Madoff. Never mind, the weather is perfect, the snow is even better, and everyone except for me has caught the virus. (Wife, son, grandchildren, and staff.) What has also caught on is piling on, an American football expression for hitting someone who is already down. Ghislaine Maxwell pimped for Epstein because she wanted money, the reason most pimps do what they do. She is neither a mass murderer, nor did she mastermind the fall of the Twin Towers. But if you heard the talk, especially by women, you’d think she was guilty of both.

Conrad Black got it right in his column: “Four anonymous witnesses, after a silence of many years, encouraged by the prosecutors, who authorized substantial amounts of money for them from the Epstein Defense Fund if they would testify and advised them that if they did testify, they could get more from that fund.” Talk about enticement by eager prosecutors to make their names, as opposed to supposedly blind justice. Maxwell was not railroaded and will die in jail, but ambitious lawyers and judges have not improved justice in the most corrupt nation this side of Panama. (Twenty-three years for Harvey Weinstein for being a terrible bully and slob and having raped some women who came back does not deserve a lifetime sentence.) Reality is no longer real over there.

Ditto for Prince Braindead. That Giuffre woman is on record bragging to a friend how she slept with him in London. After twenty years she now claims she was forced to do it and wants money. That redheaded BBC horror who covers the royal family could not control his joy while reporting on Prince Braindead. The BBC’s version of Madame Defarge should enter the ugly-cow contest the locals hold every year over here. He’d win hands down, but it would be unfair to the cows. The gleeful, all-consuming enmity of the BBC against Boris is the fault of the Conservatives. Instead of cleaning the Augean stables that is the BBC, they’re doing away with boilers, cars, and houses, stuff that makes no difference to the rich but can sink the so-so below the poverty line. If Boris does not revert to being a true Conservative, in the hunt for his replacement my money’s on Hunt.

In the meantime, the blondie who used to wear black turtleneck sweaters and black slacks, bright red lipstick and a chignon, a look immortalized on magazine covers, is also going down, but in her case I hope for the minimum. Elizabeth Holmes is a cutie-pie, and she done wrong, but Wall Street bullies and Silicon Valley freaks are walking around free, some of them having done more wrong than she did. Steve Cohen, who has just bought a baseball team for two and a half billion, made 14 billion greenbacks during the rah-rah years. The feds tried for years to get him but he was too smart for them. He paid very large fines, subordinates went to the big house, but he is sitting pretty. Two major bankers in Geneva explained to me how he made his billions. Lawyers will never let it see print. And some of it was above my poor little head to begin with. But I got the gist of it. Blondie did not have Stevie’s nous. And she only raised less than a billion promoting Theranos. She’s too pretty for jail and she’s also just had a baby. Free Blondie!

Otherwise, everything’s hunky-dory. My mood turns wistful when hiking in silence in all-white surroundings. The rhapsody that was youth returns before nature’s beauty. One forgets pains and problems and even women in the silence. Nothing is as quiet as snow-covered paths in a deep forest. One sees animal footprints but hears nothing. It’s as close as one can get to paradise on earth.