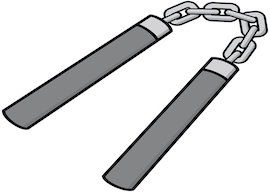 KATY, Tex.—The most amazing thing about Federal Judge Pamela Chen’s ruling on Monday that nunchakus are a legal weapon in America is that they’ve been illegal in New York State for the past 44 years. She was striking down a law from nineteen fricking seventy-four!

First of all, nunchakus, or nunchucks as we call them in Texas, are the coolest weapon ever invented because you can do that double-arm over-the-back thing and sling those babies around like you’re pretending to beat yourself in the chest with a stick, right before you crack somebody’s skull open with a quadruple backhand to all four sides of his cranium.

Unfortunately, there’s only one person in the world who was able to do that, and he’s dead. And that’s pretty much the whole point. Nunchakus were used in the greatest martial-arts movie of all time, Enter the Dragon, by the greatest martial artist of all time, Bruce Lee, and so who would think it’s a good idea to ban them? Apparently anti-Chinese doofuses in the New York State Legislature.

I don’t understand the whole anti-self-defense thing in New York, the city where you kinda need to be thinking about self-defense. They used to have the greatest knife show in the world at the Javits Convention Center in New York City, but former mayor Michael Bloomberg harassed the hell out of the organizers until they were finally forced to move it to Jersey City. To this day they have that insane “four-inch law” that says that if you carry a knife four inches or longer in a public place, you can go to jail. Excuse me, but this would not only rule out every ceremonial pocketknife awarded by the Kiwanis Club for meritorious service for the past hundred years, and every knife used by the Boy Scouts for everything from pine whittling to preparing fish for a campfire, but every steak knife at Smith & Wollensky is longer than four inches. If they raided Peter Luger Steak House in Brooklyn, they could arrest at least a hundred people on any given night, including the entire kitchen staff.

But I digress. Nunchakus, the Shaolin fighting sticks mastered by Bruce Lee, are one of the most beautiful weapons ever invented, and also one of the stupidest. I don’t know exactly how you would use it in an actual fight in which the other team also had weapons—for example, swords.

“I don’t understand the whole anti-self-defense thing in New York, the city where you kinda need to be thinking about self-defense.”

I know, I know, there might be some wacky Jackie Chan scenario in which the Nunchaku Master faked out the swordsman, did a triple backward somersault, landed on the bad guy’s bald head, and used the nunchucks to double-thump the back of his knees until he crumpled to the ground in pain and you killed him with a well-aimed blow to a pressure point in the neck.

As beautiful as that might be—and as many camera specialists as it would take to carry it off—it’s probably not practical in real life. No, in real life, you would probably just aim any object at the chain connecting the dragon stick to the yang stick, making it impossible for either stick to hurt you—and, by the way, what’s with making nunchucks so short to begin with?—or, an even more likely scenario, snapping the chain so that the Bruce Lee wannabe soils his gi when he finds himself holding two disconnected wooden twigs while you come at him slinging an ancient weapon like a meteor hammer, which is basically ten tons of concentrated metal balls on the ends of a much longer chain.

In the four decades since Enter the Dragon, I’ve witnessed nunchucks in use all over the place, but mostly as accessories for cosplay outfits at comics conventions. Back when I worked for The Movie Channel, we did a couple of sketches based around nunchakus in the old DuMont Studios in Spanish Harlem, so I guess I’ve been one of the lawbreaking rebels myself. In fact, if I recall correctly, we had a set of nunchucks displayed on the wall of my set. In that case I’m not sure whether I would be the one in possession of them or the jail term would be assigned to the set designer, but either way, that’s how hardcore we are, dude. Don’t touch ma sticks, muthafucka.

In fact, when I think about it, this may be the only time in history that we’ve needed to invoke the Second Amendment to make the world safe for art directors, restaurant designers, and Garment District fashion shows. (“I know the wooden sticks are awkward, honey, but try to hold them away from the hip because the dress is cut on the bias.”)

Of course, the lawmakers of New Yawk will need to fight back in order to keep the populace safe from counterintuitive cinematic weapons. Chain saws need to be outlawed immediately, thanks to the 1974 classic The Texas Chain Saw Massacre, which inspired Black + Decker killings in dozens of movies since then. Turkey forks will have to be banned due to that maniac in Blood Rage. Bowler hats are out, due to the Frisbee-flinging proficiency of Odd Job in Goldfinger. Cricket bats are so deadly they can kill zombies—or I guess that would be re-kill zombies (Shaun of the Dead). Fire pokers have been used in so many movies, including the classic Black Christmas, that we’ll soon need some other implement for stoking the embers. Axes of the sort used by Paul Bunyan would be disqualified even if you were only counting versions of the Lizzie Borden story. The same goes for surgical implements, thanks to the dozens of Jack the Ripper retellings. Ian McKellen proved that the gnarled walking stick, especially when used by ancient bearded men like Gandalf, is deadlier than any AR-15. Need I even mention the bark-tanned kangaroo-leather bullwhip wielded by Indiana Jones?

Those little revolving fans that you keep on your desk in the summer? Forget it. We all saw somebody’s face get pushed into the whirring blades in Happy Birthday to Me. Machetes, scythes, and Weedwackers—in fact, everything used by highway maintenance crews—are soon to face the wrath of New York legislators thanks to Jason in assorted Friday the 13th movies. Garbage disposals have ground up so many hands and other body parts (Mirror Mirror, Phantasm) that obviously the building codes need to be revised—we’ll soon be going back to tossing the spoiled meat out into the alley.

And of course we’ll need to comb through the permanent film collection at the Museum of Modern Art to make sure we haven’t left out any other deadly household objects that could cause mass havoc at the next New York Comic Con. I just hope nobody in Albany watches Ice Cream Man, in which Clint Howard mixes human body parts into various gelato flavors, because I would really really miss the Mister Softee truck.