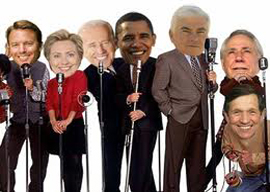 In the wake of commentator Juan Williams’ feckless firing by National Public Radio, supporters on the Internet sounded a cheeky rallying cry: “Free Juan!” But Williams has now been liberated from the government-funded media’s politically correct shackles. It’s taxpayers who need to be untethered from NPR and other state-sponsored public broadcasting.

Public radio and public television are funded with your money to the tune of some $400 million in direct federal handouts and tax deductions for contributions made by individual viewers, not to mention untold state grants and subsidies. Supporters argue that this amounts to a tiny portion of state-sponsored media’s overall budget, and an even tinier portion of the overall federal budget.

If it’s so negligible, why do NPR’s government-subsidized “journalists” cling so bitterly to the subsidies? Leverage. The government imprimatur gives NPR and PBS a competitive edge, favoritism with lawmakers and the phony appearance of being above the fray.

The Williams debacle gives definitive lie to the dulcet-toned facade. Without cause or notice, NPR announced Williams’ termination on Twitter (the social networking service). Williams, who is a Fox News contributor, had committed the deadly sin of expressing public concern about traveling with “people who are in Muslim garb … identifying themselves first and foremost as Muslims.” Confessed Williams on “The O’Reilly Factor” Tuesday night: “I get worried. I get nervous.”

Williams compounded the sin of post-9/11 candor by accurately quoting the jihadist threat of convicted would-be Times Square bomber Faisal Shahzad: “He said the war with Muslims, America’s war is just beginning, first drops of blood. I don’t think there’s any way to get away from these facts.” Indeed not.

“The government imprimatur gives NPR and PBS a competitive edge, favoritism with lawmakers and the phony appearance of being above the fray.”

Williams later emphasized in the segment that a distinction needed to be made between “moderate” and “extremist” Muslims. But left-wing bloggers, the p.c. police and Fox-hating organizations weren’t listening. Think Progress, the same outfit that is waging war against the GOP-leaning U.S. Chamber of Commerce, decried Williams’ remarks. The liberal Huffington Post piled on. Former conservative writer turned liberal scold Andrew Sullivan bestowed Williams with his “Malkin Award” (yes, named after yours truly) and condemned him for supposedly bigoted rhetoric beyond the pale. The granddaddy of all grievance-mongers, the Council on American-Islamic Relations, pressured NPR to “address” Williams’ feelings. CAIR, of course, is notorious for “addressing” its talk radio and TV critics—from the late Paul Harvey to Dr. Laura to scholar Daniel Pipes—by launching relentless witch hunts to kick dissenters off the air.

Upon summarily firing Williams for violating the public radio station’s “editorial standards,” NPR CEO Vivian Schiller appeased the leftist mob by shamelessly attacking Williams’ mental health. At an Atlanta Press Club event, the former CNN and New York Times executive said Williams “should have kept his feeling about Muslims between himself and ‘his psychiatrist or his publicist.’”