Free to Be a Communist 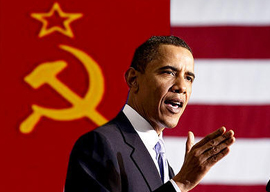 I was reading one of the angrier conservative bloggers the other day when I came to a sentence where he referred to President Obama as a “communist.”

It stopped my eye. I am no fan of Obama, and I have a high tolerance for vituperation. (I like the late Auberon Waugh’s definition of opinion journalism as “the vituperative arts.”) Still, “communist”?

Sure, Obama is a public-sector guy who in his autobiography described his one brief spell of private-sector work as making him feel like “a spy behind enemy lines.” And yes, his mother was an America-hating ethnomasochist college lefty. And before he entered respectable politics in his late thirties, Obama hung out almost exclusively with hard-left types.

But Barack Obama was never about the downtrodden masses. If he associated with revolutionaries such as Bill Ayers, it was only to feed off them and advance himself. Once he’d advanced, they went under the proverbial bus, as did the Rev. Jeremiah Wright. Barack Obama has always been about Barack Obama.

“If you want to be a communist, live to 95, and attain the highest national honors, you had better live in a liberal democracy.”

Used as an insult, the word “communist” has a quaint, musty look to it. It brings to mind the half-remembered politics of sixty years ago, much of which looks absurd now”John Birchers telling us that Eisenhower was a communist. To direct the word “communist” at some person not likely a member of any actual communist party is naff“not ironic enough for our very ironic age.

The mismatch goes further than that. To be a real communist is to make a serious commitment to a cause. Communism is a hard dogma, completely at odds with the soft-handed girlish narcissism of a late-20th-century American leftist such as Obama, who has never risked, fought, struggled, or suffered.

Established communism is a monstrous thing. We rather lightly bandy around the expression “class warfare,” but within living memory, literal class warfare was being conducted with terrible ferocity. The Black Book of Communism reproduces an editorial from a communist newspaper of 1918:

To us, everything is permitted, for we are the first to raise the sword not to oppress races and reduce them to slavery, but to liberate humanity from its shackles….Blood? Let blood flow like water! Let blood stain forever the black pirate’s flag flown by the bourgeoisie….

In human affairs, though, the highest kinds of behavior”fortitude, courage, comradeship, and sacrifice”can be employed for bad ends. Ulysses S. Grant remarked of how Confederate armies “had fought so long and valiantly” for “one of the worst” causes. Whatever you think of that cause or of his, Grant’s sentiment can be applied to a thousand conflicts in history.

In London in 1973 I accompanied a leftist friend to a private party whose guest of honor was a communist from one of the Central American nations”Guatemala, I think. This guy was no intellectual. In broken English he told us about growing up a poor peasant, about the torture and death of comrades, and of spending years on the run from the country’s military. He spoke reverently of his hero, Fidel Castro, and the fraternal support he and his comrades had received from the Soviet Union.