French or Not French? 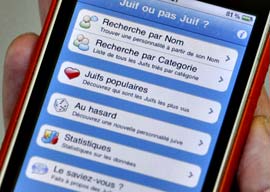 The Frogs are at it again—the French Resistance has reemerged, this time in an iPhone version. A mélange of French anti-racist and pro-Jewish groups whipped themselves into a frothy meringue of holy Gallic gall and on Wednesday their indignant croaking finally forced Apple Computer to cease and desist selling the app Juif ou pas Juif? (“Jew or not Jew?”) within the boundaries of Europe’s Most Annoying Country.

The “Jew or Not Jew?” app (still available in English at the Apple Store for $1.99) contains a database of over 3,500 famous Tribespersons, enabling users to, say, search whether Yaphet Kotto is Jewish (he is!) or how many actors in, say, Smokey and the Bandit or Billy Jack were among God’s Chosen People (zero). The French protesters’ self-righteous cries of Ribbite! Ribbite! (“Ribbit! Ribbit!”) alleged that such a database mimics a “method of designation and stigmatization always used by radical far-right milieux and racists.” A section of the French Penal Code makes it illegal to publish information pertaining to French citizens’ “racial or ethnic origin…political, philosophical or religious…or sexual orientation,” with punishment of up to five years in prison and 300,000 euros. One news report after the next reminded the world’s insatiably gullible readers that an estimated 76,000 Jews were deported from France to Nazi camps during WWII and that fewer than 3,000 returned alive, but no one specified whether they were exterminated or simply didn’t want to live in France anymore.

“This is not the France of Napoleon Bonaparte or Charles Martel.”

Ironically—or maybe not—the app’s creator, Johann Levy, is himself a Heeb. Levy claims that he and his co-Jews are forever curious about which public figures are Jewish, so he created a “fun and positive” way “to bring a feeling of pride to Jews when they see that such-and-such a businessman or celebrity is also Jewish.” In an article he penned for Le Nouvel Observateur after the Frogs yanked his app, he wrote that “The pride of belonging to the same group that a person you admire is natural.”

We bought the “Jew or Not a Jew” app, toyed around with it for a few hours, and found that we didn’t wind up liking or hating Jews any more or less than we liked or hated them in the first place. We weren’t surprised to discover that Fyvush Finkel, Meyer Guggenheim, Chaim Topol, and Simon Ashkenazi were Jewish, but Sylvester Stallone? Werner Klemperer, who played Nazi commandant Colonel Klink on Hogan’s Heroes? Steven Seagal’s dad? In each of the last three cases, we clicked “Now this is a surprise!” rather than “I knew he was Jewish!” The application also allows you to click, “Erm…I think there might be a mistake here,” so we informed the manufacturer that George Soros (listed under “Philanthropy”) and Ben Bernanke (“Economists”) were miscategorized and should have been included in the “Criminals” section.