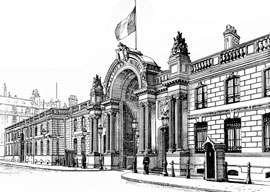 The Fifth French Republic was created in 1959 by General de Gaulle, and its constitution was devised to give France strong and stable government. It has now lasted longer than any regime since the Revolution of 1789, except for the Third Republic (1871″1940). To this extent it must be judged a success. De Gaulle gave France a strong executive president who appoints and can dismiss the prime minister. The president as head of state takes responsibility for foreign affairs and national security, the prime minister and his government for finance and domestic affairs. That’s the theory, anyway, but in fact any failure of the government reflects on the president, who usually responds by changing the prime minister.

In Gaullist theory the president embodies France and is the representative of the whole nation. In fact this is impossible. There is always opposition, as de Gaulle himself discovered when he stood for a second term in 1965 and was forced into a second-round runoff by FranÃ§ois Mitterand. He won, but 45 percent of the electorate voted against him.

No subsequent president has had de Gaulle’s authority, though Mitterand himself (president from 1981 to “95) came close. Since then, the quality has declined. Jacques Chirac, Nicolas Sarkozy, and FranÃ§ois Hollande have all been failures, Hollande so lamentable a one that he hasn”t presented himself for reelection. Governing France has never been easy”de Gaulle asked how you can govern a country that has a different cheese for every day of the year.

This time, though there are lots of candidates, there are at present three possible winners”four, if you believe that the fairly far-left Socialist, BenoÃ®t Hamon, has a chance. Not many do.

For weeks the front-runner was the candidate of Les RÃ©publicains, the traditional conservative, FranÃ§ois Fillon, who convincingly won his party’s open primary. But he has become embroiled in a financial scandal after the newspaper Le Canard EnchaÃ®nÃ©, a happy muckraker, revealed that he had put his Welsh wife, Penelope, and two of their children, students at the time, on the public payroll, though there is no evidence that they did any work. In a sense he has been unlucky. There’s a long tradition of French politicians milking the public treasury: Mitterand installed his adored (and beautiful) illegitimate daughter in a state-owned apartment. But times and the public mood have changed, as Fillon has reluctantly admitted. His campaign continues, but, though a large group of party notables sent an open letter to Le Figaro declaring their support for “the honour of a man” and asserting that Fillon’s election was necessary for “the future of France,” there are already defectors calling on Fillon to step aside.

But for whom? Alain JuppÃ©, the 71-year-old mayor of Bordeaux and former prime minister, whom Fillon defeated in the primary, has said “no thanks,” and may mean it. This may, however, be merely a show of reluctance, allowing him to respond as a matter of public spirit to appeals to save the party and France.

Save it from whom and from what? Marine Le Pen and the Front National, of course. Everyone has long expected her to get through the first round of voting and be obliterated in the second when voters come together in defense of “republican values.” That was what happened when her father, Jean-Marie Le Pen, beat the Socialist candidate into third place in the first round in 2002. Then even the left rallied in support of the incumbent president Jacques Chirac under the engaging slogan “Better the crook than the fascist.” (Fillon, if he survives long enough, might hope for the same endorsement.)

Marine Le Pen isn”t, of course, a fascist, or is at least much less like one than her father, whom she has driven out of the party he founded. (Shades of King Lear and his daughters.) The FN is always described as a far-right party, and inasmuch as it is nationalist, anti-immigrant, and more or less anti-Muslim (though it has Muslim members), this may be fair. Certainly Marine’s war cry is “France first.” On the other hand, her economic program”protection, hostility to international capitalism”is essentially Socialist. So she appeals across the spectrum. However, she repels across the same spectrum, too, which is why, even in this season of discontent and Trump and Brexit, it’s still odds against her getting to the ÃlysÃ©e. Moreover, not everything about Marine and the FN is squeaky-clean; the party is heavily indebted to Russian banks, and loans from that source don”t come without strings attached.