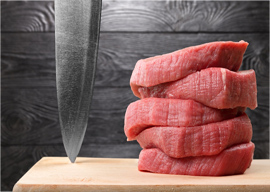 In France, a country of meat eaters, there has recently been a spate of attacks on butcher shops by militant vegans. They have smashed the windows of butcher shops or sprayed them with blood-colored paint. In the areas in which these attacks have taken place, butchers are said to live in a low-grade state of fear. There has been at least one assassination.

In an article in the French newspaper Le Figaro, a scholar of the relations between man and animals, Jean-Pierre Digard, suggested that there is a comprehensible and meaningful relation between veganism and violence. At first sight this might seem rather surprising, even contradictory, since vegans are obviously against killing sentient creatures in anything less than self-defense, and therefore might be assumed to be gentle types. But men are rarely entirely consistent where their emotions are engaged; the more extreme antiabortionists, for example, have on occasion not hesitated to murder practicing abortionists.

In his book Animalism Is an Anti-Humanism (a reference to Sartre’s book Existentialism Is a Humanism), Digard tries to explain the rise, until now inexorable, of the movement for animal rights. A major reason, he says, is the absence of any contact between the great majority of mankind and animals, except for those animals that are kept for pets and that are increasingly anthropomorphized by their owners. The movement for animal rights is a purely urban phenomenon, mainly of people who have no daily contact with or knowledge of cows or pigs or sheep, as those concerned with animal husbandry do, and who might not much care for them if they did. The only model most people now have of relations with animals is that which they have with their cat or dog, and they use it as a model or template for what they think all relations with animals should be.

Another cause is the consistent attempt by biologists, ethologists, and the like to reduce the difference between man and the animals. Man shares 98 percent of his DNA with chimpanzees, therefore he is 98 percent chimpanzee (by the same token he is 66 percent oyster). Respected, indeed world-famous, authors can get away with the following:

…the individual organism counts for almost nothing. In a Darwinist sense the organism [and man is an organism] does not live for itself. Its primary function is not even to reproduce other organisms; it reproduces genes, and it serves as their temporary carrier.

“No one who has visited a battery chicken farm can remain totally unaffected, and no doubt we prefer to avert our gaze; we choose not to know, but in thus choosing prove that we do know.”

Poor Professor Wilson, one of the greatest observers of ants in history, we cannot blame or even criticize him; he is only the envelope for his DNA.

Here let me confess that I am one of those whom Professor Digard regards with some disdain—namely, people who anthropomorphize their dogs. I loved my dog this side of idolatry. He was my companion, I was never lonely or unhappy in his company, I loved him and believed that he loved me, he had his moods and he understood mine, he went to sleep when I slept, he hated it when I left him, he was a dog of taste inasmuch as he far preferred human food to the slop normally served up to dogs, he was playful but knew when to be serious. I didn’t mind the vet’s fees in the least; on the contrary, I was pleased to pay them, I was pleased rather than angry or disdainful when I was recorded as his father in the vet’s records, and I certainly didn’t regard myself as his owner—our relationship was far too equal for that. In fact, our relationship was so perfect that I never considered what kind of relationship it was.

But that is an aside. My dog was, of course, exceptional, not to say unprecedented: intelligent, expressive, gifted. I draw no general or universally valid conclusions from his existence, any more than I would from that of Leonardo da Vinci.

In his article in Le Figaro, Digard drew attention to the tendency in the modern world for movements to grow ever more extreme, to increase and extend their demands, and thus justify ever more drastic conduct to achieve the end. The belief that animals should be well treated (and who could be against that?) becomes vegetarianism and then veganism, which progresses to gluten-phobia.

I have seen this evolution in a number of individuals, for example a young mother—recently vegan, highly intelligent—who was horrified when her own mother gave her baby a little piece of bread, butter, and jam to eat. By the young mother’s reaction you might have supposed that the baby had been fed arsenic or cyanide. At any rate, it was perfectly clear that her notions of what was good or bad for her baby were not in the slightest constrained by the need for evidence, but were rather held with fanatic conviction. To question the beliefs was to incur her anger; one sensed at once that it was better not to do so, or an explosion would result.

But why the tendency to extremism—which is not, of course, present in everyone? In my view, the fanatic beliefs that often result in aggressive behavior are symptomatic of the decline in religious belief, for which they are a substitute. Without strong convictions there can be no sense of purpose, and since we all need a sense of purpose, at least once we are freed from any real precariousness as far as physical survival is concerned, we adopt strong convictions to fill the vacuum and give us that purpose that is larger than the flux of day-to-day existence can provide.

The convictions adopted to give a sense of purpose must, at least initially, have a semblance of plausibility. It is perfectly plausible that animals raised to feed humanity are mistreated in large numbers. No one who has visited a battery chicken farm can remain totally unaffected, and no doubt we prefer to avert our gaze; we choose not to know, but in thus choosing prove that we do know. From a correct if partial perception, however, any wrong conclusion can be drawn; for conclusions do not draw themselves. The desire for a sense of purpose often precedes the choice of purpose.