From Baby Boom to Bust 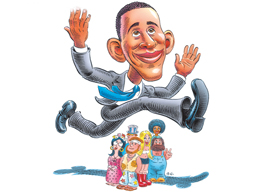 Barack Obama’s election was an anomaly, a lurch backward. It defied the apparently inevitable and stood athwart history crying, “Stop!”

It has been clear for at least ten or fifteen years that the public-finance structure prevalent through the 20th century’s second half in all Western nations”what one might call the Boomer Economy”would soon become untenable.

A nation with a big supply of energetic young people, plenty of work in low-level technical or manual positions, and a strong work ethic can afford extensive and expanding public services. A nation with below-replacement fertility, lots of healthy octogenarians, a dwindling supply of craft jobs, and a disdain for manual work can”t.

The cratering fertility rate means you will soon have a diminishing number of adults in their prime productive years to tax-harvest for government revenues. Those swelling numbers of octogenarians strain whatever parts of the pension and healthcare systems are publicly funded”even as they expand them, since no model of private provision can cover the 20-40-30 life path: 20 years of education, 40 years of work, and 30 years of retirement.

The loss of craft jobs puts pressure on governments to create unproductive make-work desk jobs for the second quartile of ability in their populations. A person who a couple of generations ago might have been an inventory clerk or a production-line supervisor is now an administrative assistant in a college or hospital, some portion of his salary drawn, directly or otherwise, from the public fisc.

Meanwhile the disdain for manual work encourages the infantile fantasy that all citizens are entitled to well-paid middle-class jobs, with the consequent need to import unskilled foreigners for the rest, putting further demands on government resources in healthcare, education, and law enforcement.

The Boomer Economy trended toward socialism because it could. The huge technical advances that followed WWII”air travel, telecommunications, and all the electronic wonders from TV and hi-fi to computers”generated wealth on a scale never before seen over large areas. It was reasonable to ask that the government redistribute some of that wealth to the old, the sick, and the helpless. It was entirely human that the standard of reasonableness slipped as the decades went by”imperceptible slippage year by year, but cumulatively devastating.

“As the need for a comprehensive divorce with the Boomer Economy becomes ever more plain, here is Obama renewing his vows to it.”

Cumulatively devastating. I grew up in the 1950s in a street of working-class people in a provincial English town. Every house was a nuclear family: mom, dad, kids. The men all had jobs. Fifty years later, I can still read them off, house by house, along the street. My dad was a furniture-company repo man. On one side of us was a butcher, beyond him a jobbing carpenter, then a worker at the local brewery, then a railroad worker. On the other side was a bus driver, a cinema projectionist, another brewery worker, a truck driver…down the street. Down there, near the bottom of English society, everybody worked.

I now read that in Britain, one person in four currently lives in a household where nobody works. One in four! Nobody works! There are probably large areas of the U.S.A., perhaps entire states, where the same is true. That’s what I meant by “cumulatively devastating.”

Not that there wasn”t some resistance to the socialistic trend, at least in those nations with a strong individualistic tradition”which mainly means the Anglosphere. In the 1980s we got Reaganism, Thatcherism, and their lesser offspring elsewhere”such as the “Rogernomics” of New Zealand’s Finance Minister Roger Douglas. (A friend of mine who was in New Zealand at the time claims to have met the last employee of the NZ Forest Service, which a few years previously had employed thousands on government salaries. Douglas privatized the whole shebang.)