From Joan to Donald 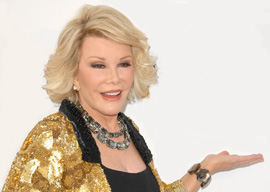 “I lost my whole family in Auschwitz. Seriously: I waited in the gift shop for hours…” “Joan Rivers

Taki’s particularly hydrophobic commenters will greet with disbelief the news that, as it turns out, I”m only 2 percent Jewish.

I”ll reveal the other 98 percent in my next column. For now, let’s all take note of this rarest of Venn diagrams: that is, a “blue moon” overlap between my own reaction and that of “14884EVR!!!” and his ilk.

I”m congenitally philosemitic, and was half-hoping to discover some genetic excuse for my condition via Ancestry DNA.

The funny part is, though, that the Jewish people and I actually have very little in common. There’s the whole “Jesus” thing, obviously. But, for instance, they obsess over food, while I find the very need to eat an annoying distraction.

Jews treasure their families; I was jealous of the kids in Lord of the Flies because they never had to deal with their parents again.

Even more heretically, I don”t think Mel Brooks is funny. In fact, the topic of comedy has proved to be a particularly touchy one: Whenever I declare that Seinfeld and Curb Your Enthusiasm foster more real-world anti-Semitism than the top 10 hate-iest Muslim hate preachers combined, my Jewish friends cast me piteous looks, because they love both shows.

I used to loathe Joan Rivers for the same reason.

For almost five years, I worked at Canada’s version of QVC, and the question I was asked most frequently was “Have you ever met Joan Rivers?” There was never a chance of that happening (I was nowhere near the production side), and that was more than fine with me. It wasn”t because Rivers hocked low-end costume jewelry; so did Ivana Trump, in the same studio, and I considered her a heroine”a savvy, unsinkable businesswoman who”d bounced back from the most notorious marital crack-up since Henry VIII.

But when Rivers did it… There was something so Fagin-esque about the way she fingered her wares, and rasped about “deals.” As I typed up descriptions of her faux FabergÃ© egg charm bracelets, I found myself fretting:

Was Joan Rivers good for the Jews?

Later, I kept hearing about how great the 2010 documentary Joan Rivers: A Piece of Work was, finally watched it, and agreed. I still found Rivers cold and scary (and her “self-made Russian aristocrat” personal taste appalling) but acquired newfound respect for her bottomless drive. Watching her win Celebrity Apprentice by outworking contestants one-third her age was inspirational (if exhausting by proxy). But Rivers seemingly devoted almost as much energy to hands-on charity work and mundane, under-the-radar mitvahs as she did on her career.

(That’s one thing the Jews have on us: Yes, they”re expected to do good deeds too, but without the added burden of having to be nice while they”re at it. “Nice” is for the goyim.)

That A Piece of Work wasn”t nominated for a Best Documentary Oscar left her newfound fans confused, but it was also weirdly fitting, given the film’s theme: that this pioneering comedian had been in the public eye for so long that we took her for granted, and didn”t give her her due.

Was it because Rivers was a woman? some asked. Because she was Jewish? wondered far fewer.

This fact is treated as ever-so-slightly freakish, akin to having a third nipple, by (otherwise detached if somewhat prolix) author Leslie Bennetts in the breezy new bio Last Girl Before Freeway: The Life, Loves, Losses, and Liberation of Joan Rivers.