From Paradise on Earth to Hell on High 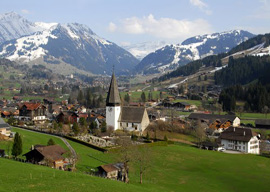 GSTAAD—Forget about Libya and don’t even think about Syria. The mother of all battles is about to take place right here in bucolic Gstaad, a place of terminal political incorrectness—until recently, that is.

But before I begin, the Beguine is far more likely to see Saif Gaddafi than we are in this glitzy nouveau-riche Mecca. The Beguine is a religious order in the Netherlands, the nation where the International Criminal Court is situated. I’d rather see Libyan justice meted out, and pronto—something like hanging a jockstrap out to dry, if you get my drift. The one I’d most like to see acting as a jockstrap is Hannibal Gaddafi, the fat slob who has besmirched a glorious name by going around in super yachts and private Boeings, beating up women and helpless servants just for kicks—and getting away with it all these years. Hannibal should be forced to serve in a Libyan male brothel as a prostitute, unless he likes it—he is a cognoscente of the profession. His brother Saadi, the least-talented football player ever (he was actually given a tryout by Juventus after buying 7% of the team), should be washing up after him. That’s what I would call real moral justice, none of that 20-hour-per-day television-watching in the Hague, conjugal visits included. As of this writing, the old mongrel is still nowhere to be seen, but if he has one brave bone left in his cowardly body, he should shoot himself in the arse, where his brain is located.

“When someone mentions art projects, disconnect his or her car’s brakes, preferably when parked up a steep hill.”

But back to Gstaad and the coming fight to the death. Europe has 2.9 million millionaires, while North America has 3.1 million of the same species. Asian mimes have reached 3 million, and at times it feels as if all of the above descend upon this village during the third week of August. Among the nine million is one German woman married to a billionaire who has decided to buy the whole of Gstaad—and I mean the whole kit and kaboodle, as they say in Kansas. Her husband has a couple of ex-wives and children with his exes, so the little lady has decided to ensure her future by having the old boy buy her Gstaad. (The old man is not feeling his best.)

Some of us old Gstaad hands have tried to poison the bitch, but to no avail. She has Libyan food-tasters and such. Her latest get-rich scheme is to build an “art center” which will house conferences, concerts, caviar exhibitions, and down at-the-heel countesses looking for rich old buffers. In other words, everything a small alpine village bursting at the seams doesn’t need. Two hundred million Swiss francs are needed, and the usual social-climbing suspects are out knocking on doors. My children’s mother and I are manning La Ligne Maginot against the project, but our chances are as slim as those who manned the real thing back in 1940. After all, greed equals fear where moolah is concerned.