From Sir, With Love 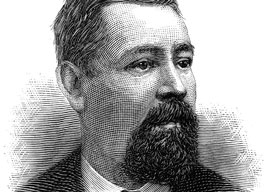 Everyone loves a tyrant, provided he is far enough away or long enough ago. Tyrants are much more interesting than so-called democratic politicians, especially nowadays, when so many of the latter have done nothing with their lives except sit electoral office. What, for example, would Latin American literature be without tyrants? The writer of that part of the world has so many to choose from: General Melgarejo of Bolivia, for example, who marched his troops over the balcony of his palace to demonstrate their loyalty to a visitor; or Maximiliano HernÃ¡ndez MartÃ­nez of El Salvador, who trained himself to stare at the sun for spiritual purposes. My favorite is Justo Rufino Barrios of Guatemala, who was once seen to take a copy of the Guatemalan constitution, fold it in four, and sit on it. “I”m going to rule in Guatemala as long as I like,” he said, “and I”ll hang anyone from the nearest tree who doesn”t like it.” Full marks for sincerity and truthfulness, if not for political philosophy.

This is not, however, a propitious age for the tyrant: we prefer our tyranny to be of the creeping, surreptitious, bureaucratic, and undermining kind, rather than galloping, open, obvious, and overbearing. Tyrants are the dinosaurs of small-brained and rigid ways destined for extinction, while democratic politicians are the swift little mammals with adaptable ways who take over from the dinosaurs as the climate changes. But who is so dull that he is not fascinated by dinosaurs, even if he wouldn”t want a Tyrannosaurus rex in his garden?

“MacÃ­as forbade all printed matter, killed those who wore spectacles as dangerous intellectuals and threats to his regime, as well as about a quarter of the rest of the population, and was so solicitous of his country’s economy that he kept the national treasury under his bed. I think he is worth remembering.”

I was walking down London’s Cecil Court”the haunt of people of slightly Aspergerish disposition who collect rare, though not the very rarest, books” yesterday, when I stopped at the window of a seller of banknotes from around the world. I have always liked banknotes as physical artefacts, and have kept one or two from the foreign countries that I have visited (I am not so much a collector as an accumulator). There was displayed in the window what was called “The Tyrant Collection”: six colorful banknotes marked with the portraits of various tyrants. It was cheap and I decided to buy it, which is really against my principles. Normally, I keep only banknotes of the countries I have visited, from the time I have visited them. Among them, of course, are banknotes with portraits of tyrants: Baby Doc, Julius Nyerere, Mobutu Sese Seko.

I went in. A very pleasant lady asked me whether she could help me. I asked whether the Tyrant Collection were still available. She said that it was, and then turned to the other assistant in the shop.

“Can you pass me a Tyrant?” she asked, and he did so in a transparent plastic envelope.

Among the things I accumulate are striking utterances that express a great deal in a few words, and among them now, engraved on my mind, is “Can you pass me a Tyrant?” Could anything better express the fleetingness, the vanity, the absurdity, of great power? Furthermore, it told me that the Tyrant Collection was, relatively speaking no doubt, a commercial success, and that I was far from alone in my taste.

I think I can put my hand on my heart and say that I have no tyrannical leanings, though no doubt like everyone else there are a few things that I should like to see prohibited, such as (in my case) chewing gum, drinks sold in cans, baseball caps, rock and other forms of pop music in public places, and preferably in private as well, fast food, men wearing suits without ties, television, mobile telephones in trains and restaurants, burqas (except for drunken British girls on Friday and Saturday nights, for whom they should be compulsory), tattoos, piercings, celebrity magazines, pasteurised cheese, the use of the word chair for chairman, conversations in public about football, the Olympic Games, jeans, skateboards, eating in the streets, coffee served in plastic containers, basketball, etc. My father liked to tyrannise the people around him, and so immunised me against the desire for power.

I told my fellow-customer that I was not an aspiring tyrant.

If I had been a tyrant I should, of course, have said “She must answer for me.”

In addition to the tyrants in the collection”Idi Amin Dada, the Ayatollah Khomeini, Saparmurat Niazov, Saddam Hussein, Mao Tse Tung, and the one who makes the others seem like soulmates of Rand Paul, Kim Il Sung”I bought the last banknote issued under Colonel Ghadaffi’s regime, with a picture of the Colonel himself, dressed oddly as ever, with a kind of sheet over his head almost like a medieval wimple, Ã  la Rogier van der Weyden or Roger Campin. Neither could I resist a banknote for Zimbabwean $50,000,000,000,000. Oddly enough, I remember a time when the Zimbabwean dollar was worth as much as the US dollar, and the design of the banknote had changed comparatively little since then: I have it still.