From the Cell to the Stage 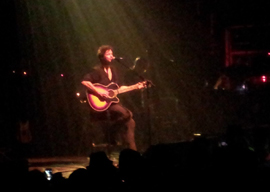 Concerts by a singer called Bertrand Cantat in Paris were canceled recently because the organizers said they could not guarantee the maintenance of public order at them. Whether this was a pretext will never be known, though it is certainly true that these days people who feel strongly about something, or at least who wish to demonstrate to others how strongly they feel about something, think themselves under no obligation to obey the law or to keep their protest within bounds. Their virtuous sentiments give them the right to deny the rights of others.

However, those who would have protested the appearance of Bertrand Cantat on the stage certainly had a point. He was for a time the most famous rock star in France. In 2003, he brutally did to death the actress Marie Trintignant, with whom he was having an affair. He beat her so severely that she died not long afterward of her head injuries. He was under the influence of both alcohol and cannabis at the time. For this terrible crime, in which there were no mitigating circumstances, he spent four years in prison, a derisory punishment. If you have to serve only four years for such a crime, what punishment can a lesser, but nonetheless still serious, crime attract, assuming that the principle of proportionality of punishments has still to apply? Deflation is as serious a problem in penology as in economics.

“In Cantat’s case, it was surely his duty, moral if not legal, to live discreetly.”

Some might argue, of course, that Cantat, having served four years, was unlikely to repeat his act, and therefore to have kept him longer in prison would have been both primitively vengeful and a useless public expense. But that, it seems to me, is quite beside the point. (In fact, when he was released from prison, he returned to his wife, whom he had left for Trintignant. She was a Hungarian resident in France. Some time before she hanged herself in the house while Cantat was sleeping, she had telephoned her parents to tell them of his intolerable behavior.) If a man committed a terrible crime and we had a means of knowing immediately afterward that he would never repeat it, would that mean that he should escape all punishment? Are we all permitted one terrible crime that we will never repeat? Strange doctrine.

But when a man has served his sentence, whatever it might have been, does he not have a right to resume a normal life, which in Cantat’s case meant singing in public? Are not criminals to be allowed back into society? Are they to be hounded forever because of what they did?

No. In general they should be accepted back into society and given another chance. No doubt there comes a point of recidivism or seriousness of crime when they forfeit the right to live as a full member of society, though precisely where this point lies will always be a matter of judgment. As a matter of fact, most criminals rehabilitate themselves. Crime is mostly a young man’s game, and relatively few are criminals who commit new crimes after the age of 39. (Another possible, though unlikely, explanation is that they become better at evading detection.)

But the general principle that criminals should be able to reintegrate into society without constant and continued recrimination against them after their sentence has been completed implies reciprocal duties on the part of both society and the criminals; it is not purely one-way. And in Cantat’s case, it was surely his duty, moral if not legal, to live discreetly, out of the public eye, not to push himself forward or to make an exhibition of himself, so to speak.