From the Coliseum to the Octagon 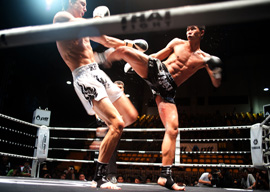 Mixed martial arts is one of the world’s fastest-growing sports, and many say it is already more popular than boxing. Yet MMA’s sociological and historical significance seems hardly to have been given a second thought. Our academics worry that it furthers “cultural ideals of domination and subordination tied to hyper-masculine norms“”i.e., “sexism” and “homophobia.” But such twaddle aside, what does MMA’s popularity signify about Western Civilization?

Our leftist academicians are probably right about one thing: MMA seems to embody modern hyper-capitalism in its crudest form. From its shoddy, unregulated beginnings, the sport has been transformed into a big-money commercial spectacle in less than two decades. The man largely responsible for this ascendancy is Ultimate Fighting Championship president Dana White, who is backed by the allegedly mob-connected Fertitta brothers. Like a Marxist caricature of the business tycoon, White’s attempts to monopolize this fledgling industry and break into international markets seem matched only by his classless thirst for self-aggrandizement. Much like our other magnanimous corporate leaders, he throws out the occasional charitable bone and bows to political correctness, even as he constantly threatens his stable of fighters with firing.

“Haven”t we seen all this before? Is history indeed cyclical?”

Despite the greed that surrounds it, MMA has earned a kind of sporting legitimacy. It is no longer the simple brawling it has sometimes been made out to be. John McCain was mistaken when he called it “human cockfighting.” At this point the conditioning and technical proficiency required to fight at the highest levels put most other professional athletes to shame. The average MMA champion has a background as an NCAA wrestler, Brazilian jiu-jitsu black belt, Olympic judoka, or some combination thereof.

And you do have to be tough. Consider fighter Conor Heun’s win despite a dislocated elbow or Rob Emerson’s embarrassing admission that he sometimes wets himself owing to extreme fatigue during practice sessions.

But does any of this bodily sacrifice make MMA a countertrend or antidote to our present age’s feminization, decadence, and self-absorption? The most likely answer is “no.”

Just like this world’s Latrell Sprewells and O. J. Simpsons, many of these fighters are without honor. Steroid use is not uncommon. More than a few fighters barely into their thirties are on testosterone-replacement therapy to compensate for allegedly low natural levels of the hormone. Some are incorrigible rule-breakers, while at least one aspiring champion engages in white-collar crime in his off hours.