From the Revolting to the Ridiculous 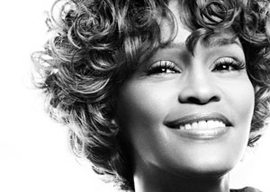 THE DARK ANGEL DESCENDS ON BEVERLY HILLS
Singer Whitney Houston’s drug-addled body finally gave out on her. She had been on drugs for the past two decades, but somehow her fans were hoping she would revert back to her wholesome pre-Bobby Brown self. Was Bobby to blame for Houston’s drug abuse, or was she always a bit wacko and merely projected a squeaky-clean image? I can’t help but feel sorry for poor little Bobbi Kristina, Houston’s teenage daughter. News reports said the girl was inconsolable and possibly suicidal. She has been admitted to the hospital twice since her mother’s death last week. Whitney was found in a bathtub at the Beverly Hilton hours before she was due to perform at a major event at the hotel. Her body has since been shipped back to New Jersey for burial. The singer was on the verge of bankruptcy when she died, having blown a $100-million fortune. Houston joins a long list of musicians who have lived fast and died young. Let us hope her daughter’s life has a happier ending.

“I knew the Grimaldis were warped, but this union really ices the cake.”

BABY HEF GOES BONKERS
Pornography and violence continue to go hand-in-hand, despite attempts to legitimize the industry. Hugh Hefner’s 21-year-old son Marston was arrested Sunday and charged with beating up his girlfriend, 2011 Playmate of the Year Claire Sinclair. Sinclair says Hefner had been violent with her in the past but that she is still willing to forgive him if he makes a public apology and seeks psychiatric help. Hefner’s dumb dad Hugh said the kids will patch things up if they really care for each other. Baby Hef certainly grew up in a disgusting environment that was surely unkind to women. Really, Marston, you should know better. Don’t take any tips from your dad.

THREE MEN AND THREE BABIES
A British man has given birth to a son. The child is believed to be the third of its kind. An American man and a Spanish man, both of whom have retained female organs despite choosing to live as men, have previously given birth. Three too many. Yuck. Third time’s a charm? There’s nothing charming about this.

NOTHING TO CLAP ABOUT
If that story wasn’t enough to stave you off sex forever, maybe this one will. The Centers for Disease Control says that gonorrhea will soon be untreatable. A new strain of the “clap” resists even the strongest antimicrobial medication. All the more reason to rock a rubber cock sock. Duh.