From War Whoops to Whining 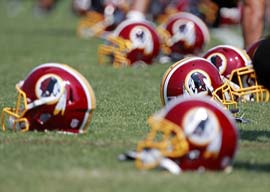 As someone who honors the rich “n” noble tapestry of Native American history and culture, I”m sorely vexed that there are still several major sports teams whose names and logos lampoon Injuns in ways that would be unacceptable if directed at any other ethnic group.

“America’s biggest cultural problem these days isn”t that we suffer from a lack of sensitivity, but that we”re drowning in it.”

My answer is simple: I would travel hundreds of miles and pay good money to see the Charleston Sambos play the Washington Jews. America’s biggest cultural problem these days isn”t that we suffer from a lack of sensitivity, but that we”re drowning in it.

Though many in our modern milieu would deride America’s so-called indigenous peoples as casino-owning, welfare-gobbling, cowboy-killing, blackout-prone wastrels, I”m baffled at how they wound up on the low end of our cultural totem pole. When I was a kid, the Red Man seemed more ubiquitous in American pop culture and mythology than the Black Man, but boy have times changed, and when I say “boy,” I mean it as no offense to the Black Man.

The tiny black man known as comedian Katt Williams, possibly as part of his ongoing public atonement for calling a Hispanic man a “bitch” and telling him to go back to Mexico during a 2011 show in Phoenix, recently took umbrage at the “racist” name of the NFL’s Washington Redskins.

Current DC Mayor Vincent Gray, who is rumored to be black and have attended a Jewish fraternity in college although his skin appears to be, well, somewhat gray, concurs that the “Redskins” name is racist. He has recently stated that if the Redskins ever wish to return to DC to play home games (they currently play in Maryland), they will need to do something about that unacceptable (and, in certain newsrooms, unprintable) team name. And a White Man at the Washington Post recently preemptively chided the Redskins” quarterback (a Black Man) because he probably won”t make any major efforts to force the team that pays his salary to erase the Red Man from their iconography.

Previous efforts to curtail Injun imagery in sports have vanished like so many smoke signals in the implacable sky. In 1995’s World Series, Major League Baseball found the Cleveland Indians (with their lobster-faced and insane-looking Chief Wahoo mascot) pitted against the Atlanta Braves (with predominantly pale-faced fans doing “tomahawk chops” to rally their team). Critics called it the “World Series of Racism.” Protesters reportedly showed their outrage and dismay by dressing as “entertainer Al Jolson in black face, a Ku Klux Klansman, a Jewish man carrying money (to mock Indians” owner Richard Jacobs, who has refused to change his team’s nickname), and as a nun and the Pope.”