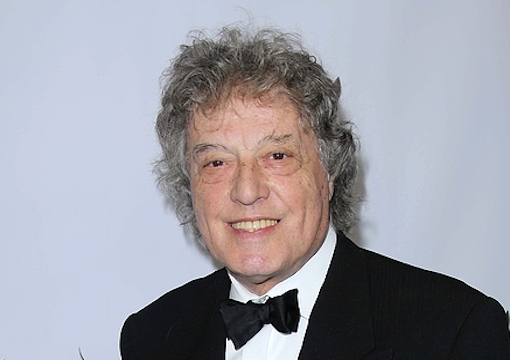 The English stage’s second Elizabethan Age might not compare to its first, but it’s been nothing to be ashamed of. And Sir Tom Stoppard has been the closest to its Shakespeare. Strikingly, of all the major English-language authors of the later 20th century, Stoppard was the most dedicated anti-Communist.

While many top writers born in the 1930s, such as Tom Wolfe and John Updike, were conservatives of one sort or another, Stoppard, who was born in Czechoslovakia in 1937, wrote as many works against Soviet tyranny as perhaps all the other big names combined.

With the publication of Hermione Lee’s authorized biography Tom Stoppard: A Life and the announced resumption in London this June of Stoppard’s 2020 play Leopoldstadt, a fictionalized family album of his ancestors, it’s timely to consider whether Stoppard’s extraordinary lack of awareness of his Jewish ancestry until he got in touch with a cousin from the Old Country in 1993 was relevant to his anti-Marxism.

“Lee’s biography makes clear how much work it is to be a great playwright.”

His family fled Czechoslovakia during the Nazi invasion in March 1939 to Singapore. Then his doctor father died at the hands of the Japanese invaders in 1942. But after he and his widowed mother arrived in England in 1946 with her new husband, who had been a major in the British Army, Stoppard enjoyed a life of near-constant achievement, admiration, and honors. Hence, his biography, while immensely informative, is lacking in dramatic tension.

After an early childhood as a refugee in Asia, England, even in 1946, seemed like paradise to young Tom. By nature a loyalist, he instantly became an unabashed English patriot. As Leonard Chamberlain, Stoppard’s autobiographical stand-in in Leopoldstadt, declares:

I’m proud to be British, to belong to a nation which is looked up to for…you know…fair play, and parliament, and freedom of everything, asylum for exiles and refugees, the Royal Navy, the royal family…. Oh, I forgot Shakespeare.

After a modestly expensive boarding school education, Stopped skipped university to become a newspaper reporter in his hometown of Bristol. This might seem like a provincial dead end, but the Bristol Old Vic theater was headlined by a pre–Lawrence of Arabia Peter O’Toole (who stole the heart of the woman Stoppard adored).

Soon, Stoppard was off for London, with beginner plays running here or there. By 1967, his Hamlet–meets–Waiting for Godot metaplay Rosencrantz and Guildenstern Are Dead was a historic sensation. His anti-left philosophic comedy Jumpers was a hit in 1972 and Travesties a smash in 1974. In response to criticism that his plays were longer on intellect than emotion, he premiered the accessible romantic drama The Real Thing in 1982.

When his spy thriller about quantum mechanics, Hapgood, proved incomprehensible to audiences in the late 1980s, he doubled down on the science in his chaos-theory-themed Arcadia of 1993, which was first inspired, implausibly enough, by James Gleick’s obituary for physicist Richard Feynman. It proved a thing of beauty, perhaps the greatest play in English since Long Day’s Journey Into Night.

After numerous flops as a hired-gun screenwriter (the best being Brazil for Terry Gilliam and Empire of the Sun for Steven Spielberg), he wrote the hit movie Shakespeare in Love, which beat his frequent employer Spielberg’s Saving Private Ryan for Best Picture.

But these numerous high points of his career haven’t exactly been dramatic comebacks because he’s never been down-and-out. He’s always been in much demand by the talented and well funded.

Lee’s biography makes clear how much work it is to be a great playwright. Whenever Sir Tom meets the Queen, she asks him her all-purpose greeting: “Busy as ever?” In Stoppard’s case, his “Yes” is always true. The only thing that appears to have slowed down Stoppard’s career was the end of transatlantic Concorde flights.

This has helped Stoppard survive and thrive in a profession that is deeply suspicious of his conservative political instincts.

In an era when everybody else was obsessing over the long-gone threat of Nazi Germany, Stoppard was speaking up against the Warsaw Pact. Stoppard’s anti-Soviet plays include:

—Every Good Boy Deserves Favor, 1977, in which a dissident is incarcerated in a Soviet mental hospital along with a genuine lunatic who, like the audience, hears a symphony orchestra at all times.

—Professional Foul, 1977, in which English moral philosophers visiting Prague for a conference must decide whether it’s moral to refuse to sneak out a banished grad student’s dissertation.

—Dogg’s Hamlet, Cahoot’s Macbeth, 1979, in which, among much else, Czech dissenters canceled from their theater jobs put on Shakespeare in a living room.

—Squaring the Circle, 1984, in which the history of Solidarity in Poland is recounted.

—Rock ‘n’ Roll, 2006, which is inspired by Stoppard’s alter ego, the playwright, prisoner of conscience, and president of the Czech Republic, Vaclav Havel.

In 1999, Stoppard published an article entitled “On Turning Out to Be Jewish” in Tina Brown’s short-lived Talk magazine. He explained that his mother, out of regard for her second husband’s feelings, had never wanted to talk about her first husband, and that she had brushed off her sons’ question of “Are we Jewish?” with talk of how nobody in her family cared about religion. (Stoppard himself is a praying man.)

So he grew up thinking he was a little Jewish, but not all that much, and generally not thinking much about his ancestors at all. Finally, in 1993, a cousin informed him to his surprise that all four of his grandparents had died in Nazi camps.

One reason that Stoppard didn’t wonder much about how Jewish he might be is that while he is an unusual-looking man, he’s not particularly Jewish-looking. He looks instead like a Rolling Stone, a cross between his friend Mick Jagger and Charlie Watts.

Another is that his parents were Czech nationalists who were proud citizens of the new republic that emerged out of the Austro-Hungarian Empire after WWI. Stoppard denies any fealty toward the Czech people, but he’s the kind of conservative who can’t help being loyal.

Is Stoppard telling the truth about not realizing how Jewish he was? After all, he is one of the great creative artists of the age, a magician of misdirection. But his older brother, a prosaic accountant who has minded his money for decades, says the same thing.

I think it’s not implausible for boys, even a hyperintelligent one such as Stoppard, to not be alert to family history. For example, when I was 21, my best friend told me he had just been watching TV with his mother (a Katharine Hepburn look-alike), when she said, “That actor looks just like Frank.”

“Oh…I guess never mentioned that I was married before.”

My friend then slowly extracted from his mother that she was sitting in a bar in New York in 1946 with her husband, Frank, when “your father,” just back from D-Day, swaggered up and asked her what a classy dame like her was doing with a loser like him.

So I told my mother this scandalous story while we were washing dishes. She replied, “That reminds me, I never told you. I was married before too.”

Her story, however, turned out to be less salacious: She showed me her first husband’s medal, awarded posthumously after he died in combat on Iwo Jima.

But I should have guessed something like that years before, because that finally explained why I had a third set of relatives besides my mother’s family and my father’s family. We went to Big Bear every couple of months with a family whom I addressed as “Uncle Chuck” and “Aunt Betty” but who, my mother had informed me, weren’t exactly my relatives. But I had never been interested enough in family relationships to ask what that meant.

It turned out that they were my mom’s late husband’s extended family, whom my mother had lived with when he had enlisted in the Marines. Yet, up through age 21 I not only hadn’t figured that out, but it hadn’t occurred to me to even ask what exactly was our relationship to our quasi-relatives.

At least in the English-speaking world, family trees are not of intense interest to boys. And Stoppard has been an impressively boyish man throughout his long life.

On the other hand, as they get older, men often take up an interest in genealogy. Hence, Stoppard in his 80s has now finally written a play inspired by his relatives, although the fictional extended family he portrays from 1899 to 1955 is grander than his own, more like the mixed Jewish and Christian Wittgenstein family of Vienna. (As Stoppard has aged, he’s become less exclusively English by culture and more of a Mitteleuropean writer in the mode of Schnitzler and Zweig.)

The Holocaust is probably the most well-documented event in human history, so Leopoldstadt in 2021 is less fresh than his anti-Soviet plays of the 1970s–80s. But it’s a solid Stoppard play, which is a fine thing to be.

Like most of Sir Tom’s works, the first scene is intended to baffle the audience (although this time not with intellectual concepts but with the abundance of relatives on stage), while the rest of the play then rebuilds viewers’ confidence that they can figure out what’s going on, finally leaving them feeling smarter than when they came in.

But, as always with Stoppard, it helps to read the published script before seeing the play. Hence my margin note on the third page of the book reads, “This play needs a family tree.” But Stoppard, of course, had thought that through: Thus on the third-from-last-page of Leopoldstadt, one of the cousins indeed presents to the Stoppard stand-in his family tree.

In the 45 years I’ve been reading Sir Tom’s work, he’s always been a step ahead of me.