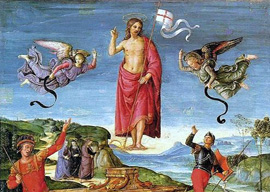 Resurrection of Christ by Rafael

He wasn’t pulling my leg. We both grew up in a vipers’ tangle of Southern Baptist fundamentalism, but obviously he was better at avoiding church than I was. He never had to endure relentless sermons about the wonder-working power in the blood of the Lamb. Unlike a hundred million or so other Americans, he was never taught that the Bible is literal history”word for word”or that Satan buried dinosaur bones to lead us astray. That’s why he called me.

“Easter,” I replied with a weary sigh. But that isn’t exactly true.

Technically, Christians commemorate Christ’s death on Good Friday. His resurrection is celebrated on Easter Sunday. This is the most sacred time of the year for many Christians. If they read their scriptures carefully, there would be nothing more troubling to modern biblical literalists than when and how the Gospels say the crucifixion happened. It is obvious to me that these Christians don’t, and it’s likely they don’t want to know. Maybe they have good reasons. For all I know, you’ll go to hell merely for reading this.

Easter hops around the calendar from year to year in tandem with the Jewish Passover. This is because the Bible says that Jesus died on the day after Passover. Or was it the day before?

“Fundamentalists really take the fun out of biblical discussions for me.”

That depends on which Gospel account you would rather believe. In Matthew, Mark, and Luke, Jesus eats his final Passover meal with his disciples, during which he institutes the Lord’s Supper. The next morning, he is crucified. Mark even checks his sundial:

It was nine o’clock in the morning when they crucified him. (Mark 15:25)

Yet according to the Book of John, Jesus’s last supper is not a Passover meal. Pilate condemns Jesus to death the day before Passover, at the exact time of day when the sacrificial lambs are being slaughtered at the temple:

In the next passage, Jesus carries the cross to Golgotha”by himself, according to John”and is crucified. Where was Simon of Cyrene to help shoulder the burden? He only helped in the first three Gospels. From there, the astute reader can collect contradictions like trading cards.

What were Jesus’s last words before he died? In Matthew and Mark, Jesus cries out, “My God, my God, why have you forsaken me?” In Luke, he is more hopeful: “Father, into your hands I commend my spirit.” In John, he simply declares: “It is finished.” After that, the versions of his resurrection spin off in four different directions.