Fury Road at the Box Office 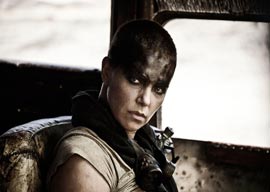 The four Mad Max movies are nominally post-apocalyptic, although their explanations for the end of civilization keeps mutating as the budgets expand, from the decline of morality in 1979’s Mad Max to the energy crisis in 1981’s Road Warrior to nuclear Armageddon in 1985’s Beyond Thunderdome to all of the above plus global warming in last weekend’s Fury Road. Director George Miller doesn”t take his movies” prophecies of imminent environmental doom very seriously, describing their catalyzing catastrophe as merely “when all the bad things we read in the news come to pass.” Thus, Fury Road is a car chase flick on such a jaw-dropping scale that the shoot looks like it must have emitted enough greenhouse gases to melt the Antarctic ice cap.

Indeed, these movies about a future in which savage Australian booners drive fast and fight furiously to get enough gasoline in order to drive and fight to steal more gas might eventually give you the impression that the petrol isn”t really the point. The “guzzoline” is simply the McGuffin justifying all that very Down Underish driving and fighting.

Even without the end of the world having transpired yet, Miller, a former doctor, had enough revhead victims of car crashes and bar brawls gurneyed into his Sydney emergency room to inspire his low budget Mad Max. Fortuitously, he wound up with a 23-year-old unknown named Mel Gibson donning highway patrolman Max Rockatansky’s black leather uniform, setting Gibson on an unexpected aesthetic trajectory toward his masochistic masterpieces The Passion of the Christ and Apocalypto.

Miller’s Mad Max movies aren”t really about how poor Australians will be in the future; they”re more about how broadly prosperous they are in the present. Even after RagnarÃ¶k, Australia’s cashed up bogans hooning across the Outback in five mile-per-gallon hot rods.

”Fury Road is like a 120-minute Roadrunner cartoon, with roughly the same depth of character development, and a more childish sense of morality: in Fury Road, the good people are good-looking, while the bad people are hideous freaks.”

Because the limited number of Australians have an entire continent to themselves, the Lucky Country is the best place in the world to be an average bloke. (Miller himself is from a more bourgeois background, one similar to that of Nebraska director Alexander Payne: both are the sons of Greek immigrant restaurant owners.)

Unlike in the Mediterranean, the Canberra government has cracked down hard on blue-collar illegal immigration by boat, so Aussie miners can still make up to $200,000 per year servicing the Chinese construction bubble.

Back in 2012, Australian iron ore heiress Gina Rinehart, the richest woman in the world at the time, complained about the high wages she had to pay, calling for bringing in more foreign workers. “Africans want to work, and its workers are willing to work for less than $2 per day,” she ominously observed. In America, she would have been instantly invited to conferences in Aspen and Jackson Hole to articulate to her fellow billionaires her important insights about fighting racism through re-imposing indentured servitude. But in Australia she was hooted down for her lack of mateship.

(In contrast, Australian politicians are united in promoting white-collar legal immigration. Eventually, Australia will wind up with an Asian managerial class. Whether these future rulers will continue to tolerate the natives” expensive tradition of egalitarian fraternity is a can Australia’s current leadership prefers to kick down the road.)

Is Fury Road really as good as its 98 percent thumbs up rating among critics on Rotten Tomatoes? Or is its decent $44 million opening weekend and B+ rating by moviegoers more indicative?

Well, the entire movie is exactly like that awesome trailer, only it’s 48 times longer. Fury Road is like a 120-minute Roadrunner cartoon, with roughly the same depth of character development, and a more childish sense of morality: in Fury Road, the good people are good-looking, while the bad people are hideous freaks.

Filling Gibson’s black leather jacket, Tom Hardy hasn”t much to do other than look stoic. The Londoner’s posh attempt at an Aussie cop’s accent sounds more appropriate for the West End stage. (Has Australia really run out of charismatic leading men?)

But that’s still better than Charlize Theron’s flat American accent as the good gal who attempts to liberate the grotesque bad guy’s five supermodel wives. Toward the end, Miller dreams up a bit of business to justify Theron’s dialect disaster that surpasses even his own past achievements in preposterousness: at age seven, you see, Charlize’s character was kidnapped from California by Australian land pirates who drove back across the dried-up Pacific Ocean.