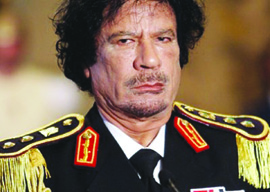 Being a dictator must be an amazing intoxicant.

Given the choice between keeping his throne or living a life of lavish luxury in exile, Muammar Gaddafi chose to stay “in power” and live like a rat. When discovered, he was found in a sewer drain looking very undictatorlike.

That had to be tough for Gaddafi, the man who set the standard for dictator couture. Yet he surrendered all the glitter and glam to remain in Libya until the bitter end, clad in tatters and funkier than a fat man’s drawers.

But Gaddafi gave up more than his coif. He also chose to relinquish his bevy of beautiful babes. Though he had few wives by Muslim standards, Gaddafi was a ladies’ man. His nurse had been a voluptuous blonde Ukrainian woman named Galyna Kolotnytska. Until recently she was at his side 24/7. Kolotnytska abandoned Gaddafi in February when a Ukrainian defense ministry aircraft flew 185 people out of Libya.

“How do I know he was crazy? Because he hadn’t FLED THE COUNTRY WITH HIS AMAZON WOMEN and his BILLIONS OF DOLLARS!”

Her departure didn’t put a dent in his entourage, as Gaddafi always had gorgeous amazon bodyguards at his side. Can you imagine super-tough runway models surrounding you 24/7? Ladies, can you picture having deadly Chippendale dancers at your beck and call? Having that type of protection should compel the average dictator to retire in luxury. With all that pleasure, who needs power?

Gaddafi’s bodyguards were supposedly required to be virgins, and each would give her life to protect Gaddafi. These women were willing to sacrifice orgasms in order to protect that wrinkly old loon. Yet when Gaddafi was captured, his amazons had vamoosed.

I suspect they were somewhere getting laid, as they realized he was crazy, and they’d better make up for lost time. How do I know he was crazy? Because he hadn’t FLED THE COUNTRY WITH HIS AMAZON WOMEN and his BILLIONS OF DOLLARS!

Gaddafi was warned. But when the insurrection began, he was still hanging on like a hair on a biscuit.

The same is true of Saddam. He had more than enough warning to move mad money into other accounts and set up lavish residences almost anywhere, even if he had to use one of his crazy kids’ names. Yet at the end of his rule, there he was, hiding like a rat in a hole. Saddam went from using gold-plated toilets to copping a squat in the desert sand.