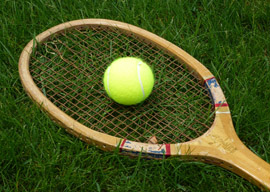 Write about things you really know, was the advice Papa Hemingway offered wannabe writers, so here goes: The French Open is still on, Wimbledon is coming up, and I’ve just read a lament by some Frenchwoman about how professional tennis and big-time sports have become ever more ubiquitous and ever more out of reach. Duh!

A former model by the name of Géraldine Maillet has made a documentary about the 2015 French Open, not exactly a stop-the-presses kind of story as it hit the video shops just as the 2016 Open began. The French Championships, as they were back then before the Open era of 1967, was my favorite tournament—Paris being Paris, the Parisian girls being, well, beautiful and easier than most, and a very laissez-faire attitude among tennis officials making it so.

Needless to say, the French Open is now a very different affair. Top players are multinational corporations, marketing is a sine qua non, and if one wants to speak to a player, one goes to his agent’s agent and negotiates an appointment. Everything is machinelike: the play, the way players act, their training, even the umpiring, with Cyclops overruling the human error. Players are protected from prying eyes inside the locker room, and from getting in each other’s heads by their limited access to them. Coaches, trainers, gurus, and dietitians make sure of it. Tennis is a soulless game made so by technology and hucksters who sell it to advertisers who in turn sell it for big corporation dollars. Hype rules supreme and debases the game. Everyone, with very few exceptions, looks and plays the same. The most banal questions precede and follow the matches by hacks who are basically cheerleaders. Welcome to the modern game of pro tennis. And we also have the elephants on court: doping and betting. The last two were Greek to the old-timers. No longer.

“Yes, they were innocent, beautiful days—an Eden, as far as I’m concerned.”

Maillet regrets she didn’t have the access one William Klein had back in 1982, when he made a documentary about that year’s French Open. It was still tennis back then, with Borg and McEnroe and Connors and their wooden rackets and the tantrums on court of the last two, but even then players were becoming more out of reach. Sure, he filmed Nastase smoking in the locker room and coaches openly discussing strengths and weaknesses of their players in the competitors’ section just above the center court, and one sees a much slower game with guile and touch being as important, if not more so, than sheer power. But it was already a professional game played by pros.

My story begins back in 1956, when I first hit the circuit, when money was paid to the stars under the table and players had no chairs between games, no umbrellas to shield them from the fierce sun, no bathroom breaks, no injury time, no masseurs, no tie-breaks, and no ball boys to hand them a towel between points. The big names were Rosewall, Hoad, Laver, Emerson, Newcombe, Drobny, Patty, Fraser, Krishnan, Washer, Pietrangeli, Santana, Osuna, I could go on. The atmosphere was one of youth, athleticism, good sportsmanship, fun, and long lazy hours waiting to play a match in country clubs, except for the four Grand Slams, which were played in stadiums.

The South African Gordon Forbes wrote a wonderful book some 37 years ago called A Handful of Summers, and every time I open it I can hear Nicola Pietrangeli, a great player who won the French twice in a row and had a game that looked remarkably like that of Roger Federer, singing in the shower. Roy Emerson, another great—twelve Grand Slams—was also a shower singer, driving us crazy with his rock & roll tunes as opposed to Nicola’s Neapolitan canzones. There was a long-standing poker game that began in the South of France tournaments in the spring and ended after Wimbledon when payment was due. The main players were Pietrangeli, the Mexican Pancho Contreras, the Yugoslav Ivko Plecevic, and yours truly.

We were all friends, traveled together, and only the Australian team had a coach, Harry Hopman, who was there to keep the boys out of trouble. Here’s an example of how raw things were back then: My doubles partner, Nico Kalogeropoulos, and I faced the top American team, Richey-Froehling, in the first round of the French. We won the first two sets and were in a long third one when Richey decided to break into the drinks container that no one had bothered to unlock before the match. While doing it he sprained his hand. Nicky and I decided that if he defaulted we would be robbed of a victory, so we gave him twenty minutes to fix his hand. They then proceeded to win 6-4-in the fifth set. Rafael Osuna, who had won the U.S championship in Forest Hills the year before, beating Frank Froehling in the final, loathed Richey, a Texan with no manners but a great fighter on court and almost as great a whiner. Rafe was so upset that I had lost—and seeing Richey not even thanking us for the break we gave him—he took out a knife and advanced towards Richey. I threw myself between them, telling Rafe that “a piece of shit like Richey wasn’t worth jail time.” Richey apologized and we all shook hands. Rafael Osuna died soon after in a plane crash.

Yes, they were innocent, beautiful days—an Eden, as far as I’m concerned. But now let’s see the replay and listen to a message from our sponsor.