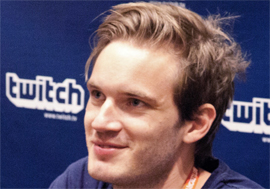 Judging from what I pretend to know about the demographics of this site’s readership, you likely haven’t heard of PewDiePie (pronounced like “Cutie Pie”), even though he is the only human being on Earth to have more than 100 million YouTube subscribers. He is not yet 30 and has no college degree, yet his estimated wealth is anywhere from $20 million to $40 million—all for doing little more than filming himself playing video games and cracking jokes in the process.

Nine years ago at the age of 20, the YouTube superstar born in Gothenburg, Sweden as Felix Kjellberg registered a YouTube account under the name “PewDiePie.” By the end of 2011, he had 60,000 subscribers. He reached a million subscribers by July of 2012. He recently eclipsed 100 million subscribers, making him the most popular solo artist on YouTube. The only account that has more subscribers is T-Series, an Indian company which churns out endless Bollywood soundtracks and indie pop music.

Think about that for a moment—on YouTube, a site that gets more traffic than every other site in the world besides Facebook and Google and is essentially the planet’s default TV station, a 29-year-old gamer has more followers than every major media outlet and celebrity except for one music-pimping channel in a country that has nearly a fifth of the world’s population as potential subscribers. He has an unfathomable amount of sway over global pop culture.

Back around the turn of the millennium when screenwriters were being put out to pasture and TV was becoming top-heavy with reality shows, I predicted that we will know the End Times have arrived when they have reality shows that feature people watching TV. Instead of watching TV, PewDiePie mostly plays video games to the endless delight of his 100 million+ subscribers.

“If you’re remotely aware of how politics work, you know that propaganda is the only game there is.”

As banal as PewDiePie’s content is—I tried watching, and I found it more inscrutably boring and soul-sucking than even playing video games, which I haven’t done for a generation—and as small and easily distracted as the minds of his followers apparently are, he has tremendous power to shape those minds. I am not being cheeky or ironic when I say that gaming addiction may be as destructive on the culture as drug addiction. Every adult I know who’s an avid gamer is a horrifyingly nonproductive fuckup and welfare case.

Still, the king of video gamers may have more legitimate influence in the propaganda game—especially among the young—than a century-old and absurdly wealthy “nonprofit” organization with a proven track record of having the media, the government, and the police on a leash. And in that sense, I don’t care how stultifyingly stupid his show is.

And even though he’s profited tremendously from modern online culture, PewDiePie also faced some bumps along the road due to the fact that, as a young and irreverent male video-game player, he sometimes makes comments that cause scandals in a world where the primary mortal sins are racism, sexism, and homophobia. Oh—and anti-Semitism. If you weren’t aware, that’s the biggest sin you can commit these days.

One look at PewDiePie’s blond hair and blue eyes is all the evidence you need that he is not Jewish—in fact, he looks like the SS Officer that likely populates the many paranoid fever dreams of the world’s countless Holocaust survivors and those who continue to make money and wield political power by guilt-tripping people who had nothing to do with the Holocaust. Then you take a gander at ADL Executive Director Emeritus Abe Foxman, and he’s essentially a classic anti-Semitic cartoon made flesh. Their physiognomy alone sets up a cultural clash of epic proportions.

PewDiePie has had several scrapes with the thought police who have sprouted like a billion flowers on seeds that were planted by the ADL way back in 1913. After Georgia factory owner Leo Frank was convicted—by a jury that included five Jews—of the rape and murder of a 13-year-old white girl he employed, the ADL sprung into existence and convinced many in the media that Frank was convicted due to “anti-Semitism.” When their efforts successfully forced the State of Georgia to commute his death sentence to a sentence of life in prison, a white mob dragged Frank out of confinement and lynched him. Over the years, the ADL’s mastery of propaganda and pressure tactics have largely erased the whole “raped and murdered an underage white girl” part of the Leo Frank narrative. As the narrative was retooled, Frank became the victim—of the phantom virus known as anti-Semitism.

Back in 2012, PewDiePie was slammed for making rape jokes and made a public vow to cease making sport of sexual-assault victims. I have not heard his rape jokes, so I am in no position to gauge whether or not they were funny.

In 2016, after further criticism, he vowed publicly to quit using the slurs “gay” and “retarded.”

In 2017, Disney—urged by Jonathan Greenblatt and the ADL—cut all professional ties with PewDiePie after it emerged that, as pranks, he paid people on the street $5 to pose with a “DEATH TO ALL JEWS” sign and also arranged for a guy in a Jesus costume to pose with a sign that read, “HITLER DID ABSOLUTELY NOTHING WRONG.” His alibi was, like the character in The Magic Christian who poured $100 bills into a giant vat of excrement to see how far people would go for a little money, he wanted to see what “crazy” things people would do for money. He also bent over backward to proclaim that he doesn’t hate Jews and doesn’t support Nazis.

It was also in 2017 that YouTube brought the ADL into their “Trusted Flagger” program, meaning that any video that the ADL classified as “hate speech” would likely be demonetized and probably axed entirely. The ADL undoubtedly played a huge hand in YouTube’s recent purge of 17,000 “hateful” accounts and 100,000 “hateful” videos.

PewDiePie immediately distanced himself from the shooter and said he felt “absolutely sickened having my name uttered by this person.” But that doesn’t matter much in the modern age. The concept of guilt by association—and by extension, of erasing that guilt by disavowing the person who said you inspired their crimes—doesn’t exist anymore. No matter what he says or didn’t say, he will forever be “tied” to the Christchurch massacre.

Last week, PewDiePie and the ADL had a little dustup, and it turns out that he may understand far more about how modern media works than they do.

On Monday, after receiving a Red Diamond Creator Award from YouTube for hosting only the second channel to crack 100 million subscribers, PewDiePie announced he was going to donate $50,000 to a “charity” known as the ADL. That’s right, it’s a “charity”—as long as you file the proper papers and declare yourself a “nonprofit,” you can rake in $65 million a year to destroy people’s lives via baseless slander about “white supremacy” and “Nazis.”

Only a day later, he reneged on the offer and issued the following statement:

…we thought it would be nice to donate to a charity as a way to celebrate. I made the mistake of picking a charity that I was advised instead of picking a charity that I’m personally passionate about which is 100% my fault. Usually when I pick a charity, I take my time, I find a charity that I’m really excited about and actually passionate to donate to. So when I uploaded the video talking about the charity it was very brief and people could tell something was off. The whole internet just didn’t believe it like “why is he donating to this charity”, “look at his face”, full on conspiracy mode and it was very interesting to watch that unfold….

To be fair, I saw it as an opportunity to put an end to these alt-right claims that have been thrown against me, it wasn’t to try and clear my name or save grace. If it was I would have done a years ago, but after the Christchurch tragedy I felt a responsibility to do something about it because it’s no longer just about me – it affected other people in a way and I’m not okay with that. I’ve struggled to figure out how to do that but this was not the right way to go about it….

I knew it wasn’t perfect but I also didn’t know a lot of things that surfaced throughout this whole thing about the charity that doesn’t fit at all so I understand why people had concerns about it and these are things that I would have known myself I had just taken my time.

Making things worse—or better, depending on your perspective—on the video where he declared he would not be donating money to the ADL, he wore a zip-up shirt with a collar featuring what many mistook as an iron cross, although a better case could be made that it was actually a Georgian Bolnisi cross or a Maltese cross, but as we should all be well aware by now, a lot of people NEED to see Nazis everywhere and will not be persuaded otherwise.

Was he as abjectly unaware of the ADL as he claimed to be? It’s not likely, seeing as how they were instrumental in wrecking his deal with Disney. Was he unaware that many people would interpret the symbol on his collar as an iron cross? Nah, not very likely, either. By offering to donate to the ADL and then having a change of heart after being informed about the organization by his fans—but being extremely vague about what he learned and why it informed his decision—was he in some way signaling to 100 million+ politically naïve gamers that the ADL is a malicious organization whose entire business involves defaming anyone who doesn’t bow to their power? Was he slyly winking at them and saying you shouldn’t donate a penny to a “charity” whose entire mission was to defame you, your right to speak, your culture, and your progeny?

Since I believe that circumstances shape generations rather than the inverse, I suppose I cannot fault the young’uns for having attention spans shorter than a flea’s. Technology has made them that way. And more than anyone else, PewDiePie is a genius of the short attention span. This seemingly vapid gamer may have just outmaneuvered the ADL in the propaganda game. And if you’re remotely aware of how politics work, you know that propaganda is the only game there is.