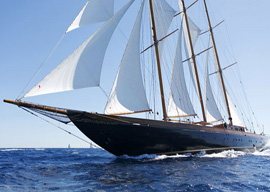 I”ve just had the worst time in my life rubbing shoulders”actually masts”with ghastly ex-Soviet Union gangsters, now called “oligarchs” by the gutter press and the New York Times/Washington Post Camorra. There are also towel-wearing Ay-rabs with obscene boats further polluting the French Riviera, but it’s the oligarchs playing Commodore Vanderbilt who make the fabled south of France stink of necrosis. Never have I seen such vile people: arrogant, ill-mannered, covered in bling, and surrounded by hookers, all showing off their horribly ugly superyachts. Once upon a time boats were built for beauty and elegance; now they”re built to show that mine is bigger than yours and that’s because I”ve stolen more money than you have. Look around you and weep, at least if you”re on a boat in the Mediterranean.

But let’s go back to the good old days for a moment. When my first wife left me for being too uxorious, I reacted as most Greeks would: I threatened to kill myself, although the thought never even crossed my mind. But my mother fell for it and soon my wishes came true with a telephone call from my father: “Your mother is worried about you, but I know you”re faking. Nevertheless, go out and buy yourself a boat.” That was 1968. My only regret after accepting my father’s generous offer was that I had not thought of threatening suicide before. Ever since the late fifties I had hitched rides on my father’s magnificent sailboat the Aries, or on other elegant sailers such as Gianni Agnelli’s Agneta, or a fellow Greek’s one and only three-masted schooner Creole. Now it was my turn.

After I acquired a 1939 Swedish cutter of rare lineage, beauty, and lines, my first wife hinted that perhaps we could get back together again. For once I acted smart. Who needs a wife when he has a boat? Or as my old man always said, “He who has a yacht has a different wife every night.” My first boat had a flush deck, was all mahogany and teak, and I thought of her being the Ava Gardner of sailing vessels: difficult and exotic, but with looks that drove other sailors wild. I renamed her Bushido after the Samurai warrior code.

“Bushi,” as my friends called her, lasted a good twenty years, then was sold off to some con man who turned her into a rental. That’s a bit like pimping out Ava”not the kind of thing a gent would do. After my father’s death in 1989, I inherited a triple-screw speedster of more than 100 feet (for you landlubbers, “triple screw” means she had three engines and three propellers, not what you first thought), but that particular Bushido almost broke me after I took her from Greece to the south of France on bunkers alone (more than 50,000 greenbacks). She cruised at 35 knots. Then some gangsters in Athens blew her up and demanded the insurance money from me, something I refused to do. A very long war of nerves and threats only ended once I finally imported some muscle from America who photographed themselves next to the leading hood’s daughter, forcing him to surrender.