Garofalo: Guardian of the Lowly Negro 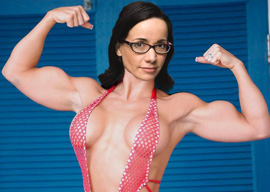 Janeane Garofalo likes her politicians like she likes her coffee…black. In her most recent psychotic attempt to help the black achiever Herman Cain, Garofalo ranted:

People like Karl Rove liked to keep the racism very covert. And so Herman Cain provides this great opportunity so that you can say, “Look, this is not a racist, anti-immigrant, anti-female, anti-gay movement. Lookit, we have a black man!”

Cain is a black man who became an adviser to the Federal Reserve on monetary policy affecting business and finished his corporate career as chairman of a regional Federal Reserve Bank—one small step from running America’s most powerful banking system.

Why would the Republicans possibly support a black guy with Cain’s credentials? He’s far too qualified to be president. According to Garofalo, Herman Cain is a token but too stupid to recognize it. If only Cain were an unqualified metrosexual man of questionable African descent, the Republicans would have hit the trifecta!

“If you were Janeane Garofalo, would you want to deal with yourself sober?”

We’re our own worst enemies a lot of the time, but I still blame men.

She might as well have said, “Democrats are our own worst enemies, but I still blame Republicans.”

Garofalo knows she is demented; to her credit, she admitted in a 2003 interview that she had “overcome a sobriety problem with alcohol.” If you were Janeane Garofalo, would you want to deal with yourself sober?

Garofalo looks for darkness. She told an interviewer:

I guess I just prefer to see the dark side of things.

Garofalo seems fixated on dark politicians. When she is not “helping” America’s first dark—well, or at least semi-dark—president, she’s counseling a fully dark presidential candidate. As Garofalo warned, “You get pigeonholed if you don’t look a certain way.”

Sort of like how liberals pigeonhole black people to be Democrats?