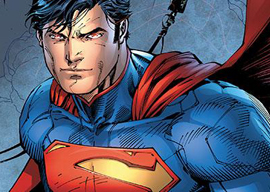 Gay activists insist that “faggot” comes from the word for the kindling beneath the feet of heretical homosexuals. That’s a lie.

But while the word “faggot” doesn’t come from “a bundle of sticks,” the word “fascist” does.

Behold: In the name of “truth, justice and the American way,” a renowned science-fiction writer has just been condemned to (professional) death for expressing his views on homosexuality in a tiny Mormon magazine almost twenty-five years ago.

Orson Scott Card wrote the beloved 1985 Hugo and Nebula Award-winning novel Ender’s Game “about the innocence of a child winning out over war and hatred,” an “irony” which seems to be making his “homophobia” all the more heartbreaking to his lifelong (liberal) fans.

So what did Card say?

Back in 1990“and again in 2004“he objected to the legalization of sodomy and “gay marriage” by judicial fiat. If unelected judges can nullify thousands of years of civil and religious law in a trice, he asked, what else will our robed rulers force us to accept? Will ordinary people someday rise up against this tyrannical system?

“These spindly beta males all secretly see themselves as righteous macho caped crusaders, rescuing the world whether it needs it or not.”

That candid, decades-long (and, some would say, perfectly sound) opposition to “gay marriage” in particular and top-down social engineering in general suddenly rendered Card persona non grata when DC Comics hired him to write a Superman comic last month.

That was the stick that broke the faggots’ back, or perhaps the one they’d been waiting to beat Card with for some time.

Confronted with 12,000 petition signatures and the door-slamming departure of the project’s illustrator, DC put Card’s assignment on hold.

No matter that Superman was the Klan-inspired (!) creation of two Jewish teenagers who lifted his name from Nietzsche (boo!) and his origin story from the Bible (hiss!). Far from being a piece of UNESCO-type public (intellectual) property, the Man of Steel was sold off long ago to a giant corporation (boo again!) in a deal that makes the chief of the Lenape tribe look like Donald Trump.

It’s almost touching: These progressives’ sudden affection for Superman”remember when he symbolized everything that was wrong about America?”is probably the closest they’ll ever let themselves get to a patriotism of sorts.

Of course, these born-again defenders of Superman’s honor are the same types who’ve turned Christ (another super-powered hero) into “Jesus of Narcissists,” another flattering reflection of their own scab-picking First World problems and faddish pagan beliefs.

(One of Card’s harshest critics calls himself “the last scion of Norse warriors and the forbidden elder gods.”)