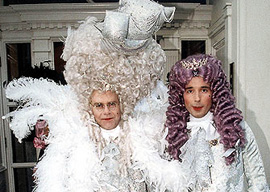 Studying news reports of England’s recent “equality drive“ to award courtesy titles to gay partners of knights, one gets the sense that all gay people endorse gay marriage. Then again, one gets that sense with all mainstream media coverage of the topic, although this is hardly the case.

Right-leaning gays”yes, they exist”dismiss pretend marriage-equality arguments because they”re unbalanced. An opposite-sex union offers children a gender-balanced model of family (meaning one father and one mother), and we all know that even ninety-nine great moms can never replace a real father. Designing motherless and fatherless “marriages” is deliberate. Honest and compassionate citizens have never planned or sanctioned easy divorces.

The pro-free-market gay writer Richard Waghorne stresses a point we all need to digest:

A wealth of research demonstrates the marriage of a man and a woman provides children with the best life outcomes, that children raised in marriages that stay together do best across a whole range of measures.

“We need to strengthen existing marriages rather than trying to weaken the institution itself.”

Given that liberal/left heterosexuals have been campaigning against the institution of marriage for decades, why can”t liberal-left homosexuals? And why support gay marriage and not polygamy if love-feelings are all the rage? Where is the consistency in all of this “equality” talk?

Self-identified lesbian and feminist Julia Bindel asserts in The Guardian:

I absolutely agree that fighting for the rights for same-sex marriage is going too far. I would outlaw marriage for everyone, including heterosexuals, and grant access to a civil partnership union across the board.

Yet her position has received little attention. The mission media doesn”t know how to deal with gays outside the box. Unscripted television and blogs can throw politically correct agendas off course. Bindel, no robot, also spoke out on Murdoch’s Sky News.