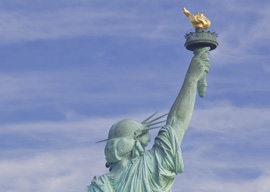 Gazillions. That’s the number of times the federal government has spied on Americans since 9/11 through the use of drones, legal search warrants, illegal search warrants, federal agent-written search warrants and just plain government spying. This is according to Sen. Rand Paul, R-Ky., who, when he asked the government to tell him what it was doing to violate our privacy, was given a classified briefing. The senator—one of just a few in the U.S. Senate who believes that the Constitution means what it says—was required by federal law to agree not to reveal what spies and bureaucrats told him during the briefing.

The rules for classified briefings of members of Congress on areas of government behavior that the government wants to keep from its employers—the American people—are a real Catch-22. Those rules allow representatives and senators to interrogate government officials about government behavior that they are afraid to reveal, and they require those officials to answer honestly and completely. But the rules keep the interrogations secret, and they expressly prohibit members of Congress from telling anyone what they have learned.

So Paul and his colleagues who joined in the secret briefing now know the terrible truth about the government watching us, but they cannot reveal what they know. Paul—who is the son of Rep. Ron Paul, the greatest congressional defender of limited government in our era—when asked what he learned at these secret briefings and aware that he could be prosecuted for telling the truth, chose a fictitious word to describe the vast number of violations of privacy at the hands of federal agents: gazillions. Paul’s personal courage in using a word like gazillions to convey an oblique message of truth in the face of an unjust law that commanded his silence reminded me of St. Thomas More’s silence in the face of an unjust law that commanded his assent to the king’s headship of the church.

The feds are no happier with the senator’s personal courage than the king was with St. Thomas More’s, but there is not much they can do about it. If you check out your dog-eared dictionary, you will find that if it is listed at all, it gets a mention as slang. Yet most of us hearing or seeing that word understand it to mean some huge—perhaps even incalculable—number.