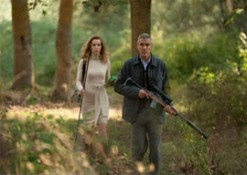 Why has The American, in which superstar George Clooney plays an international hitman hiding out from Swedish assassins in Italy, been released in early September, the Idiocracy season of the Hollywood calendar?

Directed by Dutch photographer Anton Corbijn, it has received mostly positive reviews from American critics. They hasten to point out that The American is not an action thriller as its trailer promises. Instead, it’s a very European art film, full of abstraction, and if you find it boring, then you are a mouth-breathing American who doesn”t deserve to enjoy it.

Audiences have been less enthusiastic. Ten minutes into Clooney’s plodding, morose, obtuse performance as a depressed contract killer, coughs started ricocheting around the auditorium. After twelve minutes, my son politely asked, “Dad, is it okay if I go sneak into Machete now?” When the credits rolled, half the audience sprinted out, snorting in disgust, while the other half sat rooted, sure that there had to be a post-credits stinger scene in which something cool, or at least interesting, would finally happen.

The final word on the quality of The American can be inferred from how Clooney, normally a master promoter, has dodged softball questions about it. He’s ashamed of it. (Or ought to be.)

”The American could have been entitled Brood, Mope, Frown: ‘I”m George Clooney and I”m feeling sorry for myself.’ Sorry, George, you”re never going to be the new Humphrey Bogart.”

The American is based on the 2005 novel by Martin Booth, A Very Private Gentleman. The book is a Nabokov knockoff, a memoir by a cultured, self-impressed exile coyly keeping a secret from the reader. Behind his cover story that he’s come to a charming Italian mountain town to paint its rare butterflies, he crafts expensive weapons for high-priced hitmen. Hybridizing lit fic with Stephen Hunter-style gun connoisseur genre fiction sounds intriguing, but Booth’s talent doesn”t match his ambitions. A Very Private Gentleman turns out to be the male version of the move-to-Italy travel porn of Elizabeth Gilbert’s bestseller Eat, Pray, Love.

The screenplay adaptation by Rowan Joffe, however, junks the maximalist Nabokov (except for Clooney’s pointless butterfly tattoo). It seemingly takes more guidance from Alain Robbe-Grillet, a postwar French novelist and aesthetic ideologue best known today for the glacial screenplay of 1961’s Last Year at Marienbad. Robbe-Grillet’s theory of the repetitious nouveau roman posited that plot, characters, and ideas were outdated.

To my mind, less isn”t more, less is a bore. Contemporary movies such as Inception, Inglourious Basterds, and The Departed tend to be high bandwidth compared to 1960s European flicks. Yet that debate is academic in the case of The American, because Clooney and Co. didn”t notice that there’s a distinction between stupefying and stupid.

The American is a lowbrow art film. Half consists of clichÃ©s. There’s the hitman with a heart who wants out but must do one last job. He falls in love with the hooker with a heart of gold. And how about the sexy assassinatrix straight out of a Roger Moore-era James Bond film who is a client … or a rival?

The other half of the movie is new, but knuckleheaded.

The American is full of screwing: there are about eight scenes, lasting perhaps 20 minutes, of Clooney screwing together the parts of a gun he bought mail order. But why would anybody hire an expensive fugitive on the run who doesn”t even have a garage to putter around in to spend a month building a gun? (Personally, I”ve never bought Clooney as a technical wizard. He looks like what his dad was: a local TV anchorman in the tradition of Ted Knight, Kent Brockman, and Ron Burgundy.)

And the hitvixen’s request that George custom-build her a supergun with “the capacity of a submachine gun but the range of a rifle” was anticipated by the Pentagon back in 1957. The Springfield Armory has since manufactured 1.5 million M14s. Indeed, Clooney later tells his client he’s built her an … M14. If she also needs a getaway car, maybe George should build her a Fiat in his apartment?

The script’s handful of realistic details are largely mistakes that anybody with access to Wikipedia could have fixed in ten minutes. The Day of the Jackal it’s not. For instance, Clooney proudly announces that his sniper rifle shoots bullets at 365 miles per hour. What is it? A paintball gun? The M14’s muzzle velocity of 850 meters per second is five times faster. And when is muzzle velocity denoted in miles per hour? With equal plausibility, George could have enumerated the speed as “a million furlongs per fortnight.”

Instead of a Ferrari, Clooney drives a gas-sipping Fiat compact that he never washes. But he mostly sits around Italy looking glum. The American could have been entitled Brood, Mope, Frown: “I”m George Clooney and I”m feeling sorry for myself.” Sorry, George, you”re never going to be the new Humphrey Bogart. You”re the new Clark Gable, so stop grabbing for another Oscar and make movies in which people can watch you enjoy being George Clooney.