Fidel Castro received a warm welcome in Moscow, and finally left alone with Nikita Khrushchev, ripped off his wig, detached his beard, and collapsed, “I can’t do this anymore…” 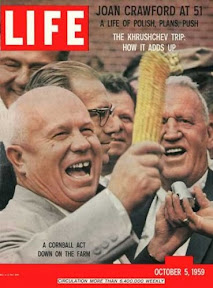 Jokes like this circulated in abundance in the USSR. Khrushchev was teased for his questionable attempts to revive lagging socialist agriculture””Communism is Soviet power plus cornization of the whole country””and generally mocked for his lack of sophistication””And what kind of ass with ears is this?” asked Khrushchev at a modern art exhibit, confronted with his own reflection in a mirror.

The screw were clearly loosening”jokes about a General Secretary would have landed you in the Gulag in the last administration.

Despite his ties of blood, Stalin had liquidated “class enemies” at a disproportionate rate in his former homeland. So, when Dzhugashvili flipped onto his back, his six hairy legs twitching, and croaked at last, many Georgians”especially Georgians“felt emancipated. Tbilisi, which etymologically means “warm place,” began to return to its usual temperature, and Georgians” new freedom (however relative) found expression in a distinctly Georgian way.

The Cuban Missile Crisis had strengthened the ties between two awkward Communist allies. In April and May of 1963, Fidel Castro extensively toured the Union, visiting major cities including Moscow, Kiev, and, of course, Tbilisi. The government of the Soviet Republic of Georgia needed to amass an impressive audience for a guest of this caliber. Khrushchev and Castro were to ride along the narrow streets of this ancient city on the historic border of Christendom in a convertible vehicle accompanied by a slate-colored motorcade and routinely waving at the adoring crowds.

People were pulled away from their daily activities to stand along the parade route and look festive. Despite the state-prescribed nature of this event, the excitement was real. Particularly thrilled were school children from Sabutarlo district”including my mother, Leli. A warm spring day outdoors was much preferred to cramming inside the stuffy halls of knowledge! And Leli probably had hours of much-dreaded piano lessons to look forward to after all that cramming.

There is an old legend that God had divided the earth amongst all the different people, but easy-going Georgians showed up very late and thus received nothing. Yet, God so enjoyed their unpunctual joie de vivre, toasting, and jokes, that in the end He gave them the best piece of vineyard-rich land He had reserved for Himself. And that is how Sakartvelo”likely called “Georgia” after its patron Saint George”came into being.

Shortly afterward, Medea helped Jason obtain the Golden Fleece. Saint Nina, my namesake and Constantine’s contemporary, evangelized the region. King Vakhtang chased a pheasant, which fell into sulfuric hot springs, and founded Tbilisi in the process (the hunter, not his game). During the course of its fifteen hundred-year history, Persians, natural disasters, and Turks destroyed this city 29 times. David the Builder brought about an artistic golden age. Female King of Kings Tamar ruled much of Transcaucasia as an emissary of Christian light. Constantinople was overrun by the infidel. King Erekle begged for Russian protection to avoid further Islamic de-civilization. Finally, Byzantium’s northern dual-headed heir too was ravaged by another kind of infidel, as were its territorial splinters.

All of this was history by the time Khrushchev paid Tbilisi a visit, but Soviet Kartvelians had preserved most of their revelry surrounding their homeland’s creation myth. And a few inhabitants, more industrious and organized than the rest of their brethren, saw the perfect opportunity for a practical joke in the new friendship between petite Cuba and One-Sixth of the Earth’s Land Surface. More industrious because they decided to reenact the entire official procession, replete with the two Communist leaders and their vehicular retinue, on the city streets that same day; and more organized because their amateur theater, of sorts, succeeded!

First, these pranksters recruited Kika. History no longer recalls whether this was that man’s actual name or a pseudonym. Suffice it to say that everybody knew and loved this friendly, cheerful local who was stricken with the Down syndrome. And apart from the vacant look in his eyes, Kika’s stature and bald head uncannily resembled the General Secretary’s. Tbilisi’s Holy Fool took his role very seriously, and this was not the first time he was granted the opportunity to represent Nikita Sergeyevich. Unofficially, of course.

Khrushchev’s visits to India had been widely publicized, and a press photograph of Jawaharlal Nehru placing a floral wreath onto the Soviet leader’s neck as a sign of solidarity had become particularly well known. And thus Tbilisian jokesters replicated the General Secretary’s eastern adventures”only the wreath they threw over Kika’s head was funerary. Close enough.

Fidel’s role was to be performed by a local beggar. A thoughtful casting director ensured that the sun-kissed Chosen One exuded masculinity through and through, at least when it came to generous hair growth in the facial region. Attention to detail was everything, and the drifter even put on a recognizable cap to mimic the radical fashion sense of the bearded prophet of Latin American Communism.

This practical joke was not at all maliciously inspired, and its instigators easily found willing participants to drive the well-matched pair through the city. Adolescents on wheels volunteered to play the motorcade escort as the final touch. The route was not difficult to locate either. The city dwellers had already gathered outside along Pavlov Street and Rustaveli Avenue, waving streamers and holding balloons, obeying municipal directives, but needing no convincing to join the festivities. They were Georgian after all!

And so they rode along the main roads of Tbilisi: the holy fool, the beggar, and rowdy Kartvelian youth.

Today, Leli is convinced that her friend witnessed the doppelgangers elsewhere in the city, while she and her classmates merely saw the Khrushchev-Castro team.

The theatrical imposters had gotten intercepted by the authorities prior to reaching my mother’s spot on the route. The Georgian KGB seems to have been just as relaxed as its ancestors at God’s land distribution party.

History is silent about grand finale of this elaborate prank. The motorcade youth dispersed as spontaneously and quickly as it gathered. Not much could be asked of the two well-meaning charlatans. The bona fide Castro successfully partook in divinely sanctioned Georgian hospitality with wine consumption out of sheep horns and never-ending, but eloquent”but never-ending”toasts delivered by a witty tamada.

Anyway, regardless of Kika’s acting skills, how could he possibly compete with the warm glow of the General Secretary’s cheeks?