Get Big Hitler Out of Politics! 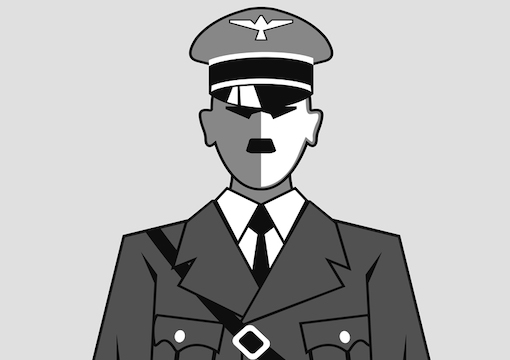 “Get big money out of politics.” So screams Bernie Sanders’ campaign website. Elizabeth Warren has her own iteration of the phrase, as have many politicians, even some Republicans. But as worrisome as “Big Money” can be in American politics, I’m a bit more concerned about “Big Hitler.”

Why can’t we keep Hitler out of our elections? Four years ago, it was the Democrats who were on the Hitler kick. “Trump is literal Hitler! He’ll put us all in camps!” And this time, it’s the right’s turn at bat because invoking Hitler worked so well for the Democrats in 2016.

Take Townhall columnist, CPAC darling, and retired Army colonel Kurt Schlichter, or as I call him, “Colonel Contraindicate,” because one is always safest not following his advice. Two years ago, he assured us that if the right just “canceled” Guardians of the Galaxy director James Gunn, leftists would be so cowed, they’d never dare cancel one of us again (how’d that work out?). And a few days before the South Carolina primary, the Colonel claimed it was a done deal that Mike Bloomberg would be the Democrat nominee.

Okay, the guy’s no Miss Cleo, but he’s popular and widely read, even if the quality of his writing can at best be described as “(thank you for your) serviceable.” Schlichter has been one of the loudest voices on the right to push the “Bernie Sanders is a Nazi” line. “The National Socialist Worker’s Party was a socialist party,” bellowed the Colonel back in 2015; “Nazism” is what “Sanders and his socialist pals are about.” And just last week, Schlichter offered the brilliant observation that “Democratic socialist” is no better than “Democratic Nazi,” officially becoming the 10,000th conservative columnist to make that point, and the 10,000th to act as though he’s the first to do so.

Also last week, Glenn Beck upped the ante by claiming that Bernie is such a Nazi that his election “will result in another Holocaust.” Beck went so far as to claim that Hitler’s minions shouldn’t even be called “Nazis,” but simply “socialists.”

“You start invoking Hitler, someone will find a way to turn it around on you.”

Super Tuesday certainly took the wind out of Bernie’s sails, but the septuagenarian ain’t rollin’ over just yet. Neither are his many passionate young followers. So my question is, why would anyone think that the best way to deal with a socialist candidate, or a person who supports a socialist candidate, is to call them a Nazi? Did that work when the left did it to Trump and his supporters? Did it turn the swing states against him?

The easiest way to lose people’s attention and respect is to tell them something about themselves that they know isn’t true. To my readers who are active on Twitter or Facebook, have you ever been called a “Russian bot” online? Have you ever opined in a thread only to have a leftist interject, “Oh look, the BOTS are out in force”? And how did that make you feel? Did you gain respect for that leftist? Did you say to yourself, “Oh no, maybe I am a bot!” Did you go home and rethink your life? Or did you immediately dismiss that person as a laughable, worthless imbecile? Of course you did.

That’s what happened when Trump supporters, or even those who were merely considering voting for Trump, were called Nazis. It’s why the mainstream media’s credibility so badly nose-dived four years ago. People tuned out, literally and figuratively. Someone on CNN or MSNBC would smugly say, “Trumpers are Nazis,” and Trump voters, knowing they’re not Nazis, could never take that person, or that organization, seriously again. The press can easily sell the public lies about faraway places and events, but it’s a lot harder to sell people lies about themselves.

“Trump is a Nazi” failed as a strategy because people who are totally not Nazis reacted very poorly to being told they were. Plenty of Americans are “nationalist” to some degree. The fact that Hitler was also a nationalist is irrelevant. Indeed, Hitler’s form of nationalism, expressed in part through expansionism and conquest of neighboring nations, is quite the opposite of Trump’s (it’s actually more emblematic of the neocons who condemn Trump).

Telling a Bernie supporter, “Hitler was a socialist, therefore you’re Hitler,” is as stupid a tactic as its Trump/nationalist counterpart. To begin with, the entire “Was Nazi Germany socialist?” debate, which for some reason a lot of people on the right seem obsessed with, is a ridiculous one. Nazi Germany was run on the Führerprinzip. Nazi Germany was Hitler. And Hitler was (to quote David S. Pumpkins) “his own thaaaang.” His views ran the gamut, as did his choice of advisers. He created a balancing act as head of state that included, at the same time, free enterprise and capitalism along with government economic controls and (non-internationalist) socialism.

Distilled to its essence, the Nazi state was a guy, and its state ideology was whatever the guy said it was. The Nazi economy was an amalgam of capitalism and socialism. In that way, it mirrors the Scandinavian nations, which do quite well with economic systems that are to an extent amalgamations. And ironically, many of the same conservatives who scream “socialism = Nazism” do an about-face when speaking of Scandinavia. All of a sudden, the socialist elements in those countries not only don’t make those nations “Nazi,” they don’t even make them socialist!

Economics professor Jeffrey Dorfman, a self-described “libertarian, free-market economist” whose work appears in Forbes and National Review, recently tried to disabuse young Bernie Bros of their love affair with European socialism by assuring them that even though “the Nordic countries offer government-paid healthcare, in some cases tuition-free university educations, and rather generous social safety nets, all financed with high taxes,” they do so “without interfering in the private sector more than required,” and thus “are not socialist.”

Economists like Dorfman become pretzels of illogic because they know that it’s exactly those European perks—the “free” health care, the “free” college, the “generous social safety nets”—that attract young people to the likes of Bernie. So on the one hand, they try to scare Bernie fans (or make others scared of Bernie fans) by invoking Hitler (“Bernie’s platform = socialism = Nazism”) while, on the other hand, excusing the economic successes of Nordic nations by saying, “Those cradle-to-grave freebies aren’t really socialism after all.”

As an aside, these conservative and libertarian “free market” economists can’t even consider possibilities outside of economics, like maybe that it’s not the system that matters but the people. Maybe Scandinavian societies are successful because the people are Northern Europeans and not sub-Saharan Africans. But such thoughts would also be “Nazi!”

It we take Hitler out of the equation, if we stop compulsively having to bring Nazis into everything, we can eliminate the need for such contortions. Making middle-class and blue-collar working folks pay more in taxes to support the lazy and indigent is bad on its own merits; you don’t have to invoke Auschwitz (in other words, something can be bad without being Nazi bad). Ah, but there’s the devil in the details: “Mainstream” conservatives like to use the “socialism is Nazism” line because it’s a great way to obscure the fact that they, too, love sticking it to taxpayers. They, too, crave government largesse. So they have to inflate Bernie into Hitler to obscure the fact that he’s merely a more exaggerated version of what they are too.

I began this column by invoking Kurt Schlichter for a reason: He’s the best possible example of this hypocrisy. Here’s a military guy who served in Kosovo in the aftermath of a war in which U.S.-led NATO forces, in an alliance with anti-Serb Albanians, mercilessly bombed Belgrade and killed Serbian civilians…which is, funny enough, exactly the same thing the Nazis did.

Schlichter has repeatedly argued that the U.S./NATO attacks against Serbia were necessary to “restore law and norms.” So apparently aping Nazis is not always wrong, as long as it’s done in the name of “restoring law and norms” in a foreign country.

By the way, that Kosovo war cost somewhere in the neighborhood of $150 billion (though ostensibly a NATO endeavor, the U.S., as always, paid the lion’s share). In what way was killing Serbs a better use of tax money than, say, free health care for American citizens? The Kosovo war had nothing to do with U.S. national security; why’d I have to pay for it? And why is it “Nazi” to suggest that my tax dollars go toward paying for some kid’s chemo, but not Nazi when those same dollars go toward bombing Serbs?

Nazis in gas houses shouldn’t throw stones. You start invoking Hitler, someone will find a way to turn it around on you. Hitler was a lot of things, and chances are, something you do, something you support, is similar to something Hitler did. Hence the wisdom of dropping him from our political discourse.

You wanna know a better strategy for dealing with Bernie kids than calling them Nazis? Try pointing out that those Scandinavian “utopias” only work because those nations haven’t spent decades throwing open their borders to Third World parasites and antisocials. Explain that the more those countries, and all Western European nations, load themselves down with immigrants and refugees, the more their systems fail. Don’t work so hard trying to disabuse young Bernie fans of their desired utopia; rather, make them realize that they have an inevitable, unavoidable choice: They can have open borders, or they can have “Scandinavia.” They can’t have both. Bernie himself used to understand that. Pointing this out to his fans is a much better strategy than calling them Nazis.

“Democratic Socialist? Might as well be Democratic Nazi” is a meme that has no benefit beyond giving simpleminded writers a few good talking points for their simpleminded readers. In terms of making a difference in U.S. elections, the Hitler slur has, thankfully, worn out its welcome. We’ve passed “peak Adolf.” If Trump’s election taught us anything, it’s that Hitler invocations have lost their pungence. No one cares, except for the small number of ADL types who fear the day that people stop thinking about Hitler as much as they do. If groups like the ADL function for any one reason, it’s to be Hitler’s PR reps, to keep his name in the press, like a low-rent public relations manager desperately trying to keep an aging, irrelevant, over-the-hill starlet’s face in the tabloids.

In about one month it’s going to be exactly 75 years since Adolf Hitler blew his brains out in that cold, damp bunker. Let’s let him rest…if not in peace, at least in quiet.