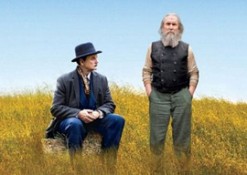 Get Low, a dramedy starring venerable elders Robert Duvall, Bill Murray, and Cissy Spacek, is promisingly based on a prime slab of Old, Weird Americana

: the true 1938 story of an elderly hillbilly (played by Duvall) who hired an undertaker (Murray) to throw him a huge funeral before he died. The Southern period setting is reminiscent of two of the most imaginative films of the last decade: the Coen Brothers” O Brother, Where Art Thou? and Tim Burton’s Big Fish. Not surprisingly, Get Low has garnered 100 percent positive ratings among Top Critics on RottenTomatoes.com.

Teddy Roosevelt’s daughter Alice said of her spotlight-loving father, “He wants to be the bride at every wedding, the corpse at every funeral, and the baby at every christening.” In this same spirit, the illiterate Tennessee codger Felix Bushaloo Breazeale decided to enjoy hearing his own eulogy.

Breazeale’s whim captured the fancy of the nation. Soon, he had a publicity agent and newspapers were treating the faux funeral like the biggest news in Tennessee since the Scopes Monkey Trial. About ten thousand people from 14 states swarmed the festivities. A two-mile long traffic jam left Uncle Bush late for his own funeral.

The “living corpse” savored every moment of the “doin’s and goin’s on,” chuckling “Folks, I’m tellin’ ya, this business of having your funeral before you die beats sparkin’ in a buggy.” Afterwards, he autographed fans” programs with his “X.” The 74-year-old backwoodsman then went to New York and appeared on Ripley’s Believe It Or Not Radio Show, but reported back that big city “victuals weren”t worth a dern.” He lived on another half decade, entertaining his numerous visitors by having his mule (named “Mule”) perform tricks.

The one thing you shouldn”t do in filming this tale is leave out all the Appalachian absurdity to render it tasteful, subdued, bittersweet, quasi-tragic Oscar-bait. Unfortunately, that’s exactly what first time director Aaron Schneider and the various screenwriters attempt.

”Get Low fails like a recent Shyamalan movie at the basic blocking and tackling of putting the camera in the right place, cutting shots at the right moment, and swelling the right chords.”

The 79-year-old Duvall is being talked up for a second Oscar, based, apparently, on the Commutative Property of Film Appreciation. See, last year Jeff Bridges got his first Oscar in Crazy Heart, another ornery coot movie in which Duvall played the best friend. So, this must be Duvall’s turn, right? He might indeed win for Get Low, because Duvall here delivers Acting for the Sake of Acting in the tradition of Al Pacino in Scent of a Woman.

If you read beyond the critics” blurbs, though, you”ll notice the strain of talking themselves into liking Get Low. Reviewing movies”making the basic Thumbs Up or Thumbs Down call”isn”t a terribly difficult trade … because making good movies is. Compare the execution of the last two Christopher Nolan movies, Inception and The Dark Knight, to M. Night Shyamalan’s The Last Airbender and The Happening. You may not understand what’s going on in Nolan’s movies, but you”re obviously in more capable hands.

Therefore, when reviewers uniformly overrate a film, it’s typically due to either politics”as with the mediocre lesbian sitcom The Kids Are All Right, which critics praised as if it were the second coming of It’s a Wonderful Life to heroically stand up to the Mormon Media Juggernaut“or respect and nostalgia. Get Low fails like a recent Shyamalan movie at the basic blocking and tackling of putting the camera in the right place, cutting shots at the right moment, and swelling the right chords.

Those aren”t weakness that we reviewers can explain in 800 words, though. The screenplay’s faults, however, are more easily explicable.

Duvall’s character is turned into a recluse with a mysterious backstory, which the tortured soul feels the need to confess to the assembled mob, Jerry Springer Show-style.

Another anachronistic touch is turning the presiding minister from white to black. I kept expecting the 1938 Tennessee crowd to react like the Western townsfolk eagerly awaiting their new sheriff in Blazing Saddles, but nobody notices. (Veteran character actor Bill Cobbs shows self-respect by playing his silly Magic Negro role with a strong note of contempt.)

Murray’s portrayal of a shady Chicago car dealer who has washed up in rural Tennessee as a funeral director starts out strongly. After whining about the unanticipated local death dearth, he hears that Duvall has hitched up his mule and come to town flashing a roll of cash. The salesman exclaims with avaricious expertise, “Ooh, hermit money!”

But Murray’s character slowly fades. Murray is that rare phenomenon”a low energy movie star, the anti-Tom Cruise. In Lost in Translation, he flourished as the still, sad center of swirling Japanese wackiness. In Zombieland, he floored audiences in his cameo as a golfing Bill Murray in living dead drag. Yet, pairing the minimalist actor and the minimalist director Jim Jarmusch in 2005’s Broken Flowers inevitably sputtered out. Similarly, Murray is ultimately undermined by Get Low‘s overarching flaw: lack of incident.