Get On Up: Godfather of Subtitles 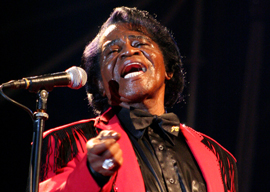 August has been turning into Black Movie Month. This year, Tate Taylor, the white guy from Mississippi who directed August 2011’s The Help, is back with a stylized James Brown musical biopic, Get On Up, that’s less reverential and more fun than expected. In an era that treasures all evidence of past black victimization, Brown is refreshing for seldom feeling the victim.

Musical biopics were common from, say, 1978’s Buddy Holly Story (with Gary Busey) up through the mid-2000s” doubleheader of Johnny Cash (Joaquin Phoenix) and Ray Charles (Jamie Foxx). They”ve never done exceptionally well at the box office: Walk the Line is the only one to reach the $100 million mark to my knowledge, and Get On Up is headed toward around half that. But pop biopics used to be reliably profitable due to soundtrack album sales.

These days, though, biopics aren”t as common, because people don”t like to pay for music anymore”a development that no doubt appalled Brown, who had the good sense to die in 2006 at age 73 before the trend became too severe. But since Sir Mick Jagger, who has a working acquaintance with intellectual property law, earned a producer credit for supplying the rights to use Brown’s songs in a movie, somebody will no doubt wind up profiting.

The movie devotes many flashbacks to Brown’s seemingly tragic childhood in a one-mule shack in the piney woods. Both parents ran off and he was dumped on an aunt to be raised in her whorehouse. In Taylor’s slightly hallucinatory movie, the child wakes up on his first Sunday morning in the bordello and walks to the church next door, where Sweet Daddy Grace, the millionaire faith healer, teaches little James that a true performer needs a cape.

But there’s no Rosebud to explain Brown’s life. He was always James Brown. In fact, like Anthony Quinn’s Auda ibu Tayi in Lawrence of Arabia, just declaiming his own name gave him confidence. In the climactic flashback, the nine-year-old James Brown looks at the camera and calmly, coldly informs us, “I paid the cost to be the boss.”

Granted, Brown victimized virtually everybody who entered the James Brown reality distortion field. But as his long-suffering second banana Bobby Byrdexplains, they all got something out of the exchange. Every musician stands a little straighter for being able to say he’s in James Brown’s band.

If capitalism is what made America great, James Brown was a great American.

Was Brown a great musician, though?

He was certainly a great bandleader. Indeed, much of Brown’s appeal for contemporary musicians is how he left audible on his records his role as a leader of men, a generator of masculine camaraderie. When Brown exhorts drummer Clyde Stubblefield just before one of the most sampled breaks in hip-hop history, “You don”t have to do no soloing, brother, just keep what you got … Don”t turn it loose, “cause it’s a mother,” you can sense they would have put up with anything to play for James Brown, even his fines for scuffed shoes.

Or almost anything. One key to Brown’s long residence on the cutting edge of stylistic change was that nobody could put up with working for him forever. So he often brought in fresh blood, such as 18-year-old bassist Bootsy Collins, whom Brown flew in on his private jet when his old band walked out just before a show.

And Brown was definitely an influential musician (although whether that is a good thing or a bad thing depends upon whether you believe African-American music is better today). Brown’s pioneering funk from his 1967-1973 peak is much celebrated in dissertations by pop music nerds for “Africanizing” music by shaking off obsolete white concepts such as melody and singing. When rehearsing 1967’s repetitious “Cold Sweat,” he tells his crack band to forget all they”ve learned about music: “Every instrument a drum.”

This paved the way for the last 35 years of rap. And we all know how wonderful that’s been.

Brown’s songs have been the most sampled of the hip-hop era. Although he didn”t rap himself, it now seems obvious that he anticipated the three keys to hip-hop: rhythm, boasting, and money mania. Brown didn”t have an ideological theory for stripping away many European refinements from his music. (He was not what you”d call a reasonable man, but his views on race were usually quite sensible.) Due to his cast-iron self-regard, he simply was among the first blacks to not care about impressing white people as being cultured. He was an uneducated Southern black and he made music for uneducated Southern blacks.

In the long run, Brown’s narrowing the parameters of black American music has been a cultural disaster: every instrument is not really a drum. In the wake of James Brown’s revolution, it seems natural that hit songs are typically written by white Europeans like Max Martin. Today, it’s the professional songwriting craftsmanship of Brown’s contemporary, Sam Cooke, who got himself shot fifty years ago, that appears to be the anomaly. Did African-Americans really compose hundreds of superb songs in the 1960s? By 2014, “Happy“ by Pharrell Williams, which would have made a worthy Curtis Mayfield B-side, seems like a monumental accomplishment.

As Get On Up more or less admits, the Godfather of Soul didn”t actually have much of a soul. He proclaimed himself a “Sex Machine“ in his 1970 hit, but Brown was more a machine for making and spending money. He was a classic megalomaniacal black big man (bantam rooster division), but he managed to hold his show business empire together for an extraordinarily long time due to his workaholism and iron will.