Getting the Alt-Right Wrong 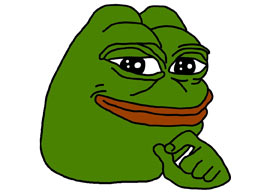 In what may very well be a desperately flailing attempt to distract the public’s attention from the possibility that she wears scented adult diapers, Clinton has lately gone Full Godwin on Trump, unleashing a shamelessly sensational fear-mongering one-minute ad linking him to the KKK and David Duke. The ad also features the perennially erudite Jared Taylor being horrifyingly sensible. It also notes that Trump recently hired Breitbart.com head honcho Stephen Bannon as his campaign CEO. Bannon had previously boasted that he transformed the Breitbart site into “the platform for the alt-right.”

During Thursday’s speech in Reno, Hillary wove an elaborate ideological beaded necklace linking Trump to Bannon to Breitbart to the Alt-Right and, by association, to Hitler and Simon Legree and, naturally, to Satan himself:

The latest shake-up was designed to “ quote “ “Let Trump be Trump.” To do that, he hired Stephen Bannon, the head of a right-wing website called Breitbart.com, as campaign CEO….But according to the Southern Poverty Law Center, which tracks hate groups, Breitbart embraces “ideas on the extremist fringe of the conservative right.”…These are racist ideas, race-baiting ideas, anti-Muslim, anti-immigrant, anti-women “ all key tenets making up an emerging racist ideology known as the “Alt-Right.”….Alt-Right is short for “Alternative Right.”…Racists now call themselves “racialists.” White supremacists now call themselves “white nationalists.” The paranoid fringe now calls itself “alt-right.” But the hate burns just as bright.

“Cultural Marxism is a toxic and destructive form of collective insanity that not only needs to be smashed and left bleeding in the streets”it needs to be murdered.”

Ramping up the propagandistic gaslighting hyperbole to psycho levels, The New York Times defines the Alt-Right as “a fringe ideology of conspiracies and hate.”

Salon refers to it as “a right-wing racist fringe…[that spews] a putrid mÃ©lange of racist, pseudo-intellectual trash.” Not to be outdone, Rolling Stone launches even further out in a PMS-addled hysterical declamation of the Alt-Right:

Calling these people anything less than vile racists is morally reprehensible and intellectually fraudulent…we can’t afford to frame its members as anything less than a band of racist, sexist, anti-Semitic, white-nationalist xenophobes who spew dangerous bullshit while hiding behind their keyboards.

As supposed evidence for the Alt-Right’s “affinity for intolerance,” Rolling Stone trots out Jared Taylor’s reaction to Clinton’s Alt-Right speech: “There is a very broad overlap between the races, but they differ in average levels of intelligence and other traits.”

Shocking! Horrifying! Problematic! Unacceptable! But they didn’t even bother to attempt to explain how Taylor’s statement was untrue…nor what it had to do with “intolerance.”

The Guardian, never missing a chance to piss on the very idea of whiteness, explains that people such as Taylor are peddling “scientific racism,” which as we all know was “widely discredited, and denounced by the UN after the second world war.”

Again, The Guardian does not waste one breath trying to explain how these theories were “discredited”; their writers are the sort that would brand you a racist merely for requesting some rudimentary elaboration.

The Guardian also quotes the Southern Poverty Law Center, as did ABC News and Hillary Clinton and nearly every obedient gelding in the mainstream media who for decades now has been dutifully regurgitating SPLC press releases without the slightest scrutiny or skepticism or basic due diligence.

Instead”as is always the case”all of the purported “debunking” and “discrediting” consists of nothing more than dismissive hand-waving and pearl-clutching and pious moral clucking about the fact that you’d be so hate-filled and disobedient not to bow before their transparently idiotic gospel of innate human equality.

The SPLC fingers former Taki’s Magazine editor Richard Spencer as the man who coined the term “Alt-Right” back in 2008. It says that Spencer surrounds himself with “pseudo-academics,” but the Church of Morris Dees makes no attempt to explain the “pseudo” part except to smear people such as Steve Sailer as Nazis and racists and anti-Semites who are driven by fear and hatred and inadequacy.

If you don’t mind me saying so, the SPLC sounds like it’s the one that’s taking a pseudo-academic approach here. To talk about “discrediting” without bothering to discredit…and to dismiss writers as “pseudo-academics” without making even a tiny effort to explain why they’re wrong…is the very essence of an anti-intellectual approach. Instead, these shallow creeps simply go for scare words and appeals to sinister motives.

Therefore, it provides me tremendous joy to see supremely well-spoken”and, unlike me, well-behaved”people such as Jared Taylor and Richard Spencer reveal their witch-hunting interrogators to be the pseudo-academics who are clearly driven by fear and hatred and inadequacy. These oft-reviled subhuman monsters always wind up coming off smarter and more reasonable than their antagonists, and it’s always a laff riot.