Getting Wasted is Wasted on the Young 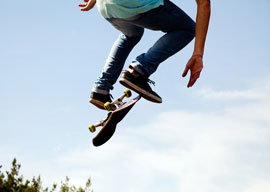 The kids today are often accused of being mindless consumers, but I don”t see it. They get their clothes secondhand, they steal their music, and they opt for skateboards and track bikes instead of cars. They get criticized for still living at home, but their parents” generation diluted the quality of education down to nothing while racking up the price. How do you pay back a $60K loan with a degree in Gender Politics? True, the kids today have no work ethic, but their parents gave all the summer jobs to illegals. You can”t infantilize an entire generation and then call them stunted.

Yes, I can. It’s summer vacation season. I can do whatever I want.

Jesus Christ, are the kids today ever annoying. They have no respect for their elders and tell monotonous stories with no beginning, middle, and end as if we have the time to listen to them. When I go to my Knights of Columbus meetings I”m the youngest guy there, and that means I shut my mouth. They know more than me and I haven”t earned the right to contribute yet. You tell that to a college kid and he”d think you were insecure.

These petulant children hardly know anything and when they learn one tiny thing they won”t shut up about it. In Ireland, bartenders fill up your glass of Guinness halfway and let it sit for a while. Then they pour it almost to the top. Then they let it sit for two full minutes. Then they top it off. But have you ever seen twenty-somethings order Guinness after coming back from Ireland? They can”t resist explaining to the bartender how it’s done and when they learn she’s Irish, they assume she’s retarded. She’s pouring it fast because we”re not there anymore and here in America, we like to get on with our day. You”re lucky you”re allowed in here. Now shut up and drink your beer, you tall baby!

Here are ten other things that drive me insane about young people.

1. THEY SNIFF
Blow your nose, you moron. How can anyone have a nose for over two decades and still not know how it works? Sniffing when you have a cold buys you maybe 30 seconds of snot-free time. Blowing your nose lasts for about ten minutes. More than once I have been sitting on a plane next to a sniffing young person and had to ask him to blow his nose. After they tried it with one of these newfangled “tissues” I provided, I could tell they were blown away by how effective it was. If these people are sniffing next to strangers on planes, who knows how annoying their snot habits are in the privacy of their own homes? They probably still eat their boogers.

2. THEY SLEEP ON THE FLOOR AT THE TERMINAL GATE
Who told college kids it was OK to sleep on the floor at the airport? They show up in their pajamas with those irritating Adidas shower shoes and conk out at the gate like it’s their dorm room. The females even carry stuffed animals.

3. THEY”RE ADDICTED TO POT
Working in media and being cheap means you often work with people in their 20s. These kids seem to think pot isn”t a powerful drug even though the THC count has climbed so high recently, you”re basically working with someone who is hallucinating. You have to tell them the same instructions at least twenty times and when you ask them where something is, they”ll ask you what you”re talking about. I don”t know how many times I”ve forwarded an email to some pothead editor that proves I asked this exact same question last week. When presented with this stunning evidence they always say the same thing: “Oh.”

Pot smokers will go off on a tangent and spend 15 hours building something nobody wants. “But I thought it would be cool if we had two robots for the shoot,” they”ll say, covered in glue and chunks of spray foam. “But we only need one,” I”ll reply, “and the client already supplied it.” Being drunk at work used to be embarrassing. Now it’s for overachievers.

4. THEY”RE ENTITLED
Despite having nothing to offer the world, they”d like to direct a feature film tomorrow or at least have their own magazine. I”ve already discussed this here, but it won”t go away. Our generation was often bullied needlessly but in an effort to make kids feel better, we”ve swung the pendulum the other way and now every kid in the world acts like a movie star. Ugly kids addicted to fast food don”t understand why they”re not getting any modeling work, and total incompetents can”t understand why they”re not CEOs. I think kids were better off when they were hanging from a basketball hoop by their underwear.

5. THEIR POLITICS ARE INSUFFERABLE
Anyone who thinks young people should vote needs to check out this guy Barack Obama. Today’s young activists are so stupid, they think money itself is “evil” except when it involves the government paying off all their college loans. When asked what to do about Wall Street corruption, their solution is to blow it up. Every time a young person tells me what they would do if they were in power, I think of Ralph and his conch shell from Lord of the Flies.