Ghost Inside Your Haunted Head 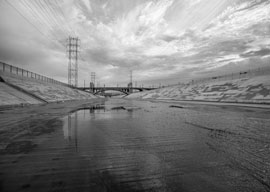 In my column several weeks ago, I took a swipe at certain types of Christian conservatives, suggesting that their belief in the reality of “demonic possession” leads them to accept wild notions about how the entertainment industry can magically influence the voting preferences of average Americans. I was trying to make the point that conservatives, especially those in the Midwest and Deep South to whom Hollywood is a foreign, bizarre, unknown entity, get a little magical in their thinking regarding the entertainment industry’s ability to “possess” people and influence or control their thoughts and lives.

Naturally, I heard from a couple of my left-leaning readers, congratulating me for sticking it to those “superstitious religious Neanderthals” on the right. It was not an unexpected response. If today’s leftists pride themselves on anything, it’s their supposed rationalism. Leftists see themselves as enlightened and logical. They “fucking love” science and reject religious hokum, in contrast to the superstitious buffoons on the right, who live in, to quote Carl Sagan, a “demon-haunted world” of their own making. With every leftist I know, this is the characteristic about which they are most proud: They are rationalists and skeptics, with shibboleth-shorn minds free of bewitchment. The problem is, leftists who consider themselves rational and non-superstitious are like scrawny nerds who look in the mirror and see a chiseled Adonis in the reflection. One almost feels bad for people so possessed of a delusion.

Let’s examine a few of the ways in which the wrongheadedness of leftists resembles the religious bunkum they claim to reject.

To begin with, leftists believe in the power of money to solve all problems, much the same as Christians believe in the power of prayer to do the same. Leftists believe that the solution to everything is to throw more money at it. Failing schools? Recession? Institutionalized poverty? If the government simply throws more money at it, all will be well. It matters not how many times throwing money at something has failed to solve a problem; for leftists, the money solution is a matter of faith. Here in bluest-of-blue California, every few years, the teachers” union demands money to “save our schools” in the form of new bonds, taxes, and ballot propositions. And still, even after voters approve whatever the hell the union asks for, our schools continue to lurk in the lowest-third rankings in the nation. So of course the solution is to ask for more money in the form of new bonds, taxes, and ballot propositions. To the religious, the proper response to a prayer that fails is more prayer. For leftists, even briefly entertaining the notion that money isn”t a guaranteed cure-all is not allowed, lest ye be seen as turning your back on your faith.

Following the deadly Philadelphia Amtrak derailment in 2015, L.A. Times editorialist and letters editor Paul Thornton wrote an op-ed in which he claimed that the head of the Association of American Railroads had stated that “financial hurdles””lack of money”were the reason Amtrak hadn”t installed the safety features that could have prevented the crash. I emailed Thornton, pointing out that the AAR head had, in fact, stated that money was not the problem, but rather “regulatory issues” were to blame. To his credit, Thornton admitted his error, confessing that he had just assumed that lack of money was the reason. And why did he make that assumption? A belief system that teaches that all problems are caused by a lack of government money, and are solved by an increase in government spending. Just as Christians take comfort from the very act of praying, regardless of whether or not the prayer is fully answered, so too do leftists take comfort in government spending. The act has as much meaning as the results.

If spending is the equivalent of prayer to a leftist, “climate change” is the equivalent of Christian “end-time” cultism. Let me share with you a very recent, and very relevant, example. Over the past week, we here in sunny insane California have faced the prospect of a major calamity as three merciless months of near-nonstop rainfall have led to the possibility of a massive failure at the tallest dam in the U.S., in Oroville, near Sacramento. It’s a big deal; 188,000 people have been evacuated. Concerns about how the aging Oroville Dam would fare in the face of record rainfall were raised years ago, but the state and the feds ignored them.

The story has been amply reported locally and nationally. But what the press conveniently leaves out of its coverage is the underlining theory behind the dam inaction: climate-change apocalyptics had convinced the Silly Putty-brained California powers-that-be that rain was never returning to the state. Quite literally, new dams, and improvements on old ones, were rejected because a doomsday cult had convinced politicians that water was “over,” that the drought that began in 2012 was not a passing thing but an “era,” something that would last decades if not a century. And why build new dams if there”ll be no water for them to hold? Why refurbish old ones if there’s no chance they”ll ever be filled again?

Dams are a relic of the Industrial Age…. They”re particularly ill-suited to the era of extremes”heat waves, floods and droughts”that climate change has brought on.

The Pacific Institute’s Peter Gleick said: “Even if we built a couple of dams, we don”t have water to fill them. We”re tapped out. The traditional answer of building more reservoirs won”t solve our problems.” Building additional reservoirs does little when there’s no snow or rain to fill them.

I”ve never heard of such utter ignorance. Building a dam won”t do a damn thing about fires or climate change or the absence of moisture in the air and ground of California. If they want to run for president, they had better do eighth grade science before they made such utterances.

The Sacramento Bee summed it up succinctly: “Questions loom about the value of such projects in an era of scarcity.” Because indeed, leftist voodoo practitioners had brainwashed the state into believing this was an “era of scarcity.” We were told that Mother Earth was punishing us for our CO2 sins by withholding her precious water, and rainfall would only return once we submitted to cap and trade and international climate-change treaties. And anyone who dared suggest that the drought was a passing thing, that weather was not permanent but fluctuating, was ridiculed for not knowing “eighth grade science.”