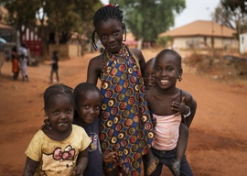 Can 2018’s tsunami of DNA data on the origins of human biodiversity help explain the puzzle of why Americans tend to equate “diversity” with Africans, especially West Africans?

Anthropology has always been assumed to have political implications. For example, in Evelyn Waugh’s classic satire on press coverage of the 1930s Italian invasion of Ethiopia, Scoop, the rival Soviet-financed and German-financed Ishmaelite embassies offer competing conceptions of Africans.

The Communist consul espouses an Afrocentric out-of-Africa theory in which blacks are responsible for all of humanity’s accomplishments and thus deserve to take over the Earth.

In contrast, at the Fascist embassy:

The door of the suite was opened by a Negro clad in a white silk shirt, buckskin breeches and hunting boots, who clicked his spurs and gave William a Roman salute.

The pseudo-consul offers an in-to-Africa vindication of his supposed ancestors:

“For instance, the Jews of Geneva, subsidized by Russian gold, have spread the story that we are a black race…. As you will see for yourself, we are pure Aryans. In fact we were the first white colonizers of Central Africa. What Stanley and Livingstone did in the last century, our Ishmaelite ancestors did in the stone age. In the course of the years the tropical sun has given to some of us a healthy, in some cases almost a swarthy, tan. But all responsible anthropologists…”

Unlike in the time of Scoop, we are currently experiencing a revolution in our understanding of prehistory due to the sudden explosion in the ability to scan the genomes of ancient skeletons. Can our increasing ability to shed light upon these old disputes about Africans offer some insight into why Americans talk as if 100 percent black were the maximum—and optimum—in diversity?

“We are constantly lectured that diversity is a magic elixir that make all institutions, including America itself, less divisive.”

On the one hand, America’s most sacred value has recently become “diversity,” which is conceptualized as a sort of all-purpose supplement, our vitamin D, that makes everything better. Despite, or more likely because of, all the evidence that demographic diversity generally makes life more awkward, we are constantly lectured that diversity is a magic elixir that make all institutions, including America itself, less divisive.

On the other hand, Americans also tend to act as if the only kind of racial diversity that interests them is blackness. In America, diversity isn’t actually a variety of races, it’s being black.

For example, over the last generation, African-Americans have won a proportional share of acting Oscars, while no American-raised Mexican actor has even been nominated since the 1980s. Yet barely anybody, not even Mexican-Americans, cares much about the latter, while the media got all worked up during the #OscarsSoWhite brouhaha over a supposed black lack. To the American press, diversity demands, in effect, that blacks win all the prizes.

One reason is, of course, the historical importance of slavery, similar to how whites once took an interest in American Indians. But blacks are also more entertaining than Native Americans, tending to be talented at music, dance, comedy, and several sports.

Finally, the scientific evidence is mounting that blacks, more than any other sizable population in America, really are more diverse—but that’s using the word “diverse” in a politically incorrect way.

How do woke white Americans attempt to square this circle of the conventional wisdom demanding diversity worship, egalitarianism, and black supremacism?

One way is by repeating the cliché that Africans—by which they mean sub-Saharan Africans, because nobody, except Nassim Nicholas Taleb, cares about Berbers or Copts—have the most genetic diversity.

It’s seen as a syllogism that Aristotle should have understood:

And blacks have more genetic diversity than anybody else;

Therefore, all men are created equal…but blacks are genetically best!

Yet recent DNA research demonstrates why this notion of African diversity is less meaningful than is popularly assumed.

More unsettlingly, the Big Data geneticists have been uncovering a quite different way in which sub-Saharan Africans, especially the West Africans from whom most African-Americans are descended, are diverse.

There are, of course, two contrasting kinds of genetic diversity: within races and between races. Although it sounds politically impious, the last half century of research has shown that typical sub-Saharan Africans are more genetically different from the rest of the human race than any other large racial group on Earth.

Since shortly after the 1986 Meryl Streep movie Out of Africa, the out-of-Africa theory has been popular among geneticists: Anatomically modern humans must have originated solely in sub-Saharan Africa and then spread out across the rest of the world

And, at least until very recently, out-of-Africa has largely held up.

A few years ago, though, the discovery that nonblacks (i.e., everybody else) are about 2 percent descended from Neanderthals (the famous extinct cavemen of Europe and the Middle East who are usually considered a species separate from modern humans) showed that the old multiregionalists had not been wholly wrong.

Then it was demonstrated that many living people east of the Khyber Pass had some small fraction of descent, peaking at 5 percent in New Guinea, from a previously unknown race or species christened the Denisovans.

Interestingly, Harvard geneticist David Reich points out in his new book Who We Are and How We Got Here that out-of-Africa is now less of a sure thing than is generally thought, arguing that the recent evidence:

…should have the effect of shaking our confidence in what to many people is now an unquestioned assumption that Africa has been the epicenter of all major events in human evolution.

In January, the genome blogger Dienekes called out-of-Africa “a theory in crisis.”

And on Monday, there was announced the discovery of an 85,000-year-old anatomically modern human fossil in Saudi Arabia.

This does not, however, mean out-of-Africa has been falsified, just that it seems less like a sure thing in 2018 than in 2008.

What I can say for certain is that, ironically, almost everybody has gotten backwards the political logic of out-of-Africa. The conventional wisdom is that giving Africa geographic pride of place in human evolutionary history proves the genetic equality of Africans and Eurasians.

In reality, the out-of-Africa theory implies that the main racial gap in humanity is between Africans and everybody else, which is not what you are supposed to believe (although many Americans today act, not unreasonably, as if they do believe it and kind of like it).

Before the genetic era, the leading old bones anthropologist, Carlton Coon, theorized in his 1965 best-seller Living Races of Man that the main divide in humanity fell along the Himalayas and other Central Asian mountain ranges. To the west of the great divide were the related races of Caucasians, Negroids, and Capoids (Bushmen and Hottentots), while to the east were the Mongoloids and Australoids. Blacks and whites were grouped together versus Chinese and Australia aborigines.

But the out-of-Africa theory moved the fundamental gap to Africa vs. Everywhere Else. And indeed, that’s what the genetic data show.

Many scientifically naive people hand-wave this logic away by extolling the now famous genetic diversity of Africans: How can we even be talking about a sub-Saharan African race existing when Africans enjoy more genetic diversity than anyone else?

Yet, as Reich observes:

A trap that researchers of African genetics, archaeology, and linguistics repeatedly fall into is celebrating Africa’s present-day diversity, epitomized by a slide showing the faces of people from across the continent who look very different from each other that many of us use when presenting on Africa.

There are indeed a few extremely divergent surviving populations in Africa, such as the yellowish-brown Bushmen (San) hunter-gatherers, their herding cousins the Hottentots (Khoi), Pygmies, and the rare click-speaking Hadza of Tanzania.