Giant House of Death on the Prairie 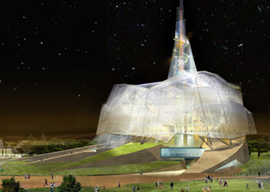 As a sentient being born in the 1960s, I don’t remember not knowing about the Holocaust. So only two things genuinely shocked me when I visited Israel’s Yad Vashem last year:

First, the Garden of the Righteous Gentiles wasn’t quite the lush oasis I’d been expecting. It was more like a row of Charlie Brown Christmas trees shoved into possibly the only stretch of parched earth left in that famously well-irrigated country.

Second? The gift shop. I mean, that it existed. In retrospect, refraining from going inside was a mistake, because then I was free to speculate on what might be for sale. Crematoria snow globes? Jedem das Seine welcome mats?

The Canadian Museum for Human Rights gift shop is already open for business online, but the $310-million (and counting) museum proper is still under construction for now. The ribbon-cutting has been pushed ahead from early next year to 2014. Or maybe 2015. Or, some of us hope, never.

“Whenever these good-for-you ‘legacy’ projects are waved in my face, I feel as if I’m being forced to give head to the Hindenburg.”

The Canadian Museum for Human Rights started out as “the dream of CanWest founder Izzy Asper” and/or (according to everyone else) one of those beyond-reproach philanthropic “gifts” the rest of us never wanted and usually wind up financing. Whenever these good-for-you “legacy” projects are waved in my face, I feel as if I’m being forced to give head to the Hindenburg.

So First Ladies inevitably champion “literacy,” and who could possibly object? Well, me, for one. The average newspaper’s “Letters to the Editor” demonstrate that this whole “teaching everyone to read and write” business has gone too far. And even decades later, only a few brave souls dare criticize the 1980s’ “feed the starving Ethiopians” fad, which succeeded only in feeding the egos of celebrities and their smug, sheeplike followers.

“Few can logically argue against the value of a human rights museum as an entity,” one Canadian columnist recently declared. In the timid Trudeaupia of even ten years ago, perhaps. But not here and not now.

If the late publishing and broadcasting baron Israel Asper hoped his parting “gift” might stifle mean-spirited whispers about “Jews running the media,” that part kind of worked, because if that charge was true, his pet project would have gotten way better press.

The mildest criticisms revolve around the puzzling location of this new national museum not in Ottawa or Vancouver, but Winnipeg, AKA “Winterpeg.” (Picture Minneapolis with more mosquitoes.)

Other concerns are more serious.

“They took all the rights/put ’em in a Rights Museum,” one Canadian blogger likes to joke. Kate McMillan (along with me and some other troublemakers) is all too familiar with the consequences of questioning our nation’s multi-million-dollar “human rights” religion.