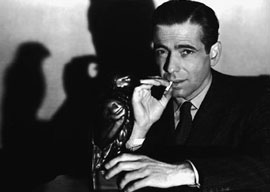 New York—Back to the mythic city, dreamed into existence by the movies long ago and instantly memorable, a visually stunning place built for action and adventure, a city of broad avenues and narrow side streets, of soaring towers and grubby tenements all giving an air of what Sam Spade in The Maltese Falcon growled dreams are made of. But what’s happened to the gritty stoops of Harlem, the waterfront filled with gleaming ships, the majestic train stations and grand hotels? I’ll tell you, progress is what happened, and it stinks.

New York for me has always been a fictive place, mostly made up from movies I’d seen, the rest from childhood impressions, when New York really was the center of the universe. A mythic city is an idea, an American masculinity sort of thing, with a moral code of honor all its own, and that includes gangsters in fedoras and cops in double breasted ill-fitting suits and dizzy dames with runs in their stockings. Yes, I know, I’m back in the ’40s and it’s all in black and white, but if you don’t like black and white and prefer car crashes and explosions in glorious Technicolor stop reading here and now. Manhattan’s skyscrapers were where superheroes strutted, always in black and white, as in The Fountainhead and Executive Suite. At times Fred and Ginger whirled around on a rooftop, and another time a giant monkey hung on for dear life at the top of the Empire State building. Yes, this was the city I first laid eyes on in 1948 and the one that had remained an illusion ever since, a shimmering picture of glamour and pleasure and danger that distracts and hypnotizes. No longer.

“Modernism, especially in architecture, is bleak and sterile and incomprehensible and a panacea for the talentless and the phony.”

The Empire State and Chrysler Buildings were and are real, of course, and their enduring place as the most distinctive and majestic buildings ever produced is assured. As is Rockefeller Center, a marvel ten blocks away that I watched nonstop on my first night in Manhattan as a 12-year-old. A dog wagged its tail in lights throughout the RCA evening. My, what a place to land after eight years of nonstop war and privations; it made Alice in Wonderland sound boring and pedestrian. The next year Warner Brothers released The Fountainhead, Ayn Rand’s paean to the value of the individual versus the collective. Ironically the hero, Howard Roark, is a modernist who struggles to build his bold designs in a compromising world that made buildings “look like Greek temples.” I was young and impressionable and failed to boo when they showed the movie on a Saturday night at Lawrenceville School. Neoclassical skyscrapers are shown to be timid and conventional by Miss Rand, who also wrote the screenplay, and director King Vidor, but the tragedy is that neither is around today to see what the modernists have done to this once beautiful city. The great press lord, played by the aristocratic Raymond Massey, does not resemble Rupert Murdoch at all because he dresses like a gentleman and doesn’t look like a man who would ever fall for the snaky charms of an ugly Chinese hustler like Wendi Deng. Massey dismisses the neoclassical designs as “great big marble bromides,” a capital offense to begin with because I cannot think of a more beautiful design than a great big marble bromide that uses glass only to frame panoramic views of Manhattan, not for its walls and exteriors.

The Fountainhead, as in the movie, should have been a lesson but it wasn’t. Sleek and dynamic modern glass buildings turn lifeless and anonymous when repeated ad nauseam, as happens to be the case in the Bagel. Great architects are very few and far between. For every Mies there are countless Norman Fosters, a man who managed to turn the main square of St. Moritz into a carbuncle of ugliness in his search for innovative modernism. (You can search all you want, Norman, without talent you ain’t gonna find it.)