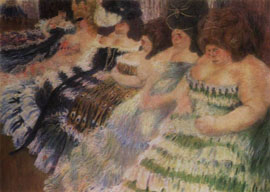 “Look at the size of those women!” exclaimed Gimlet as four enormous ladies waddled past the window. “They ought to be ashamed of themselves. You would never have seen that kind of obesity in the Champs-ÃlysÃ©es in 1945.”

He was right; they were horribly overweight.

We had been lunching in Fouquet’s to celebrate Gimlet’s winning bet on the Labour leadership contest. He is not normally a betting man, so you could have knocked me over with a quill when he told me in early summer that he had placed £10,000 on Ed Miliband to be the next Labour leader at 10-1 odds. Gimlet reckoned that the bookmakers had made a serious miscalculation:

“Andy Burnham is weak and will fall on thorny ground. Diane Abbott shares a sofa with Michael Portillo on a classless TV show, which makes her ipso facto unelectable. Ed Balls would probably make the best leader but will be eliminated due to his name. That leaves the Miliband brothers.”

Whereas I could almost accept his reasoning regarding the first three, I said that it seemed David Miliband had the thing in the bag.

“While Rome burned, Nero fiddled,” Gimlet replied obliquely. “David Miliband had several opportunities to oust Gordon Brown, but he failed to act. The party will not forgive him for it. He has been a lightweight Foreign Secretary, he has made the fatal mistake of trusting Peter Mandelson, and ultimately his fate will be sealed by the trade unions.”

I didn”t follow Gimlet’s logic at the time, but in the end that is exactly what happened, and now Gimlet was richer for it by £100,000!

We had enjoyed an excellent lunch at Fouquet’s and were sipping a little Vieille Prune before taking the Eurostar back to London.

“Before the Second World War, Britain imported about 55 million tons of food a year from other countries,” said Gimlet.

I have long since given up trying to fathom the machinations of Gimlet’s mind. When he is in his philosophical vein, it is best to let him wander off and wait to see where it leads.

“It is quite probable that we will see some profit-taking in the short term, but the overall prospect for gold and precious metals looks promising.”

“Rationing was inevitable to maintain stability,” he continued. “The government realized that with the German submarines sinking British supply ships, food would become scarcer, prices would rise, and constraint and control would be crucial. Accepting that tough times called for tough measures, the country held firm through fourteen years of rationing. People didn”t go “round complaining all the time, and you didn”t have obese women floating about in the Champs-ÃlysÃ©es. They all had very good figures.”

On that point I was in full agreement.